First up this morning: A live broadcast of The Skeptics’ Guide to the Universe (to be aired later)! 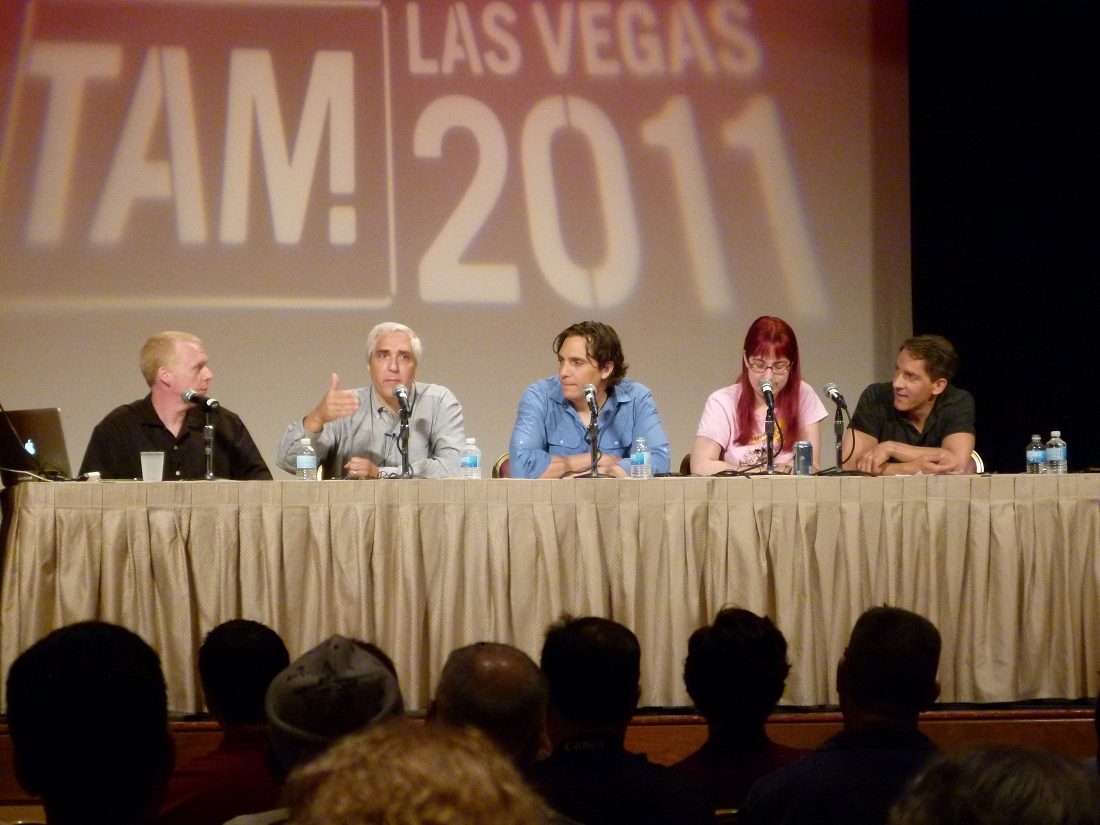 (Paraphrased) question from an audience member: What do you consider some of the wins in the skeptical community in the past year?

Response: Skeptics in Australian getting Power Balance to admit to false/misleading claims, getting Steve Novella on The Dr. Oz Show, and Charlie Sheen going crazy. All wins for the rational community. 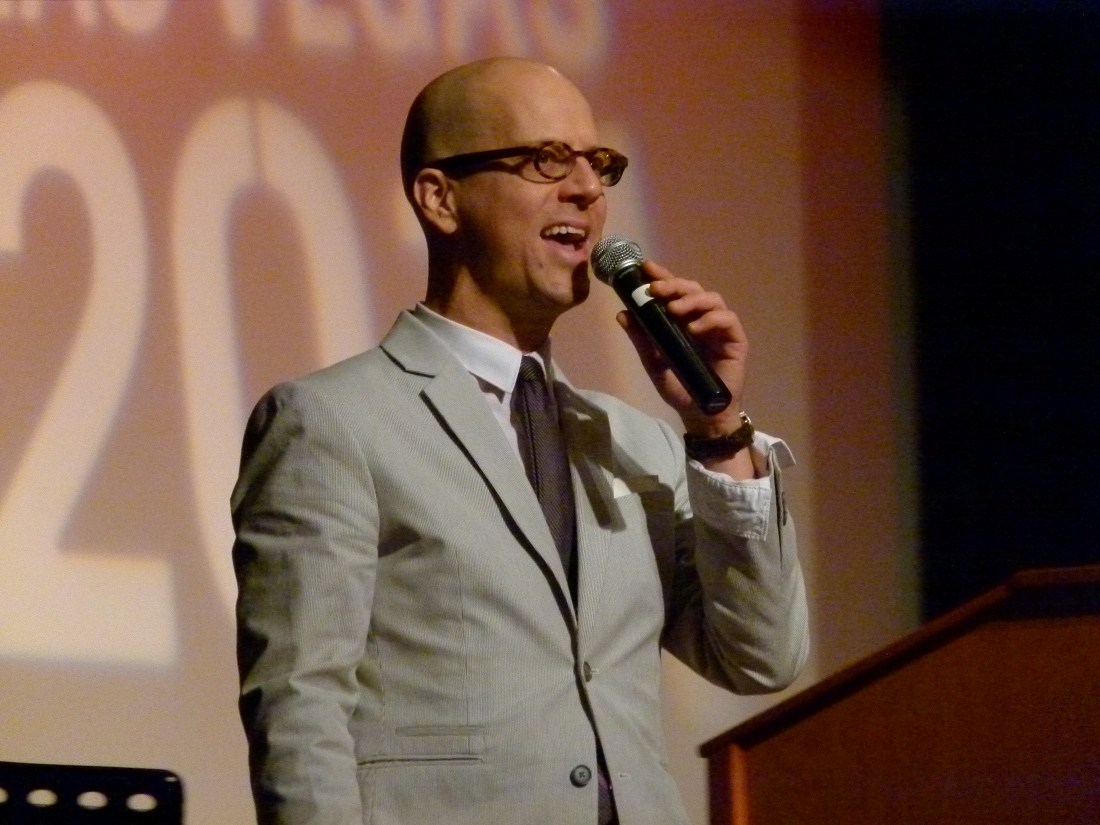 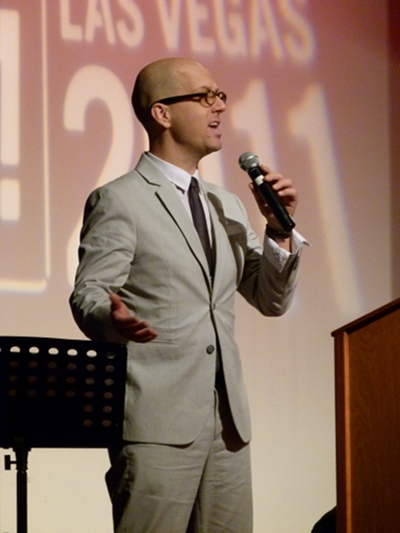 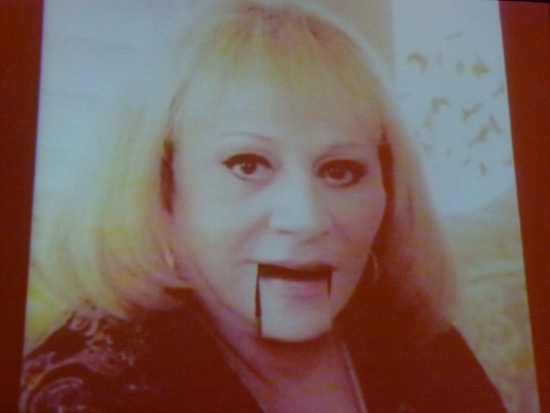 Lyric in Hrab’s song: “Make sure that your question’s a question!”

Bravo, George — that was a fantastic way to start the show 🙂 Not often you see a standing ovation for an opening!

DJ Grothe says that attendance is a record 1652 people (including 200 students!)! Over 50% of the people are here for the first time. 40% of registrants are women.

Why are we are? DJ reminds us: “Undue credulity harms people.” 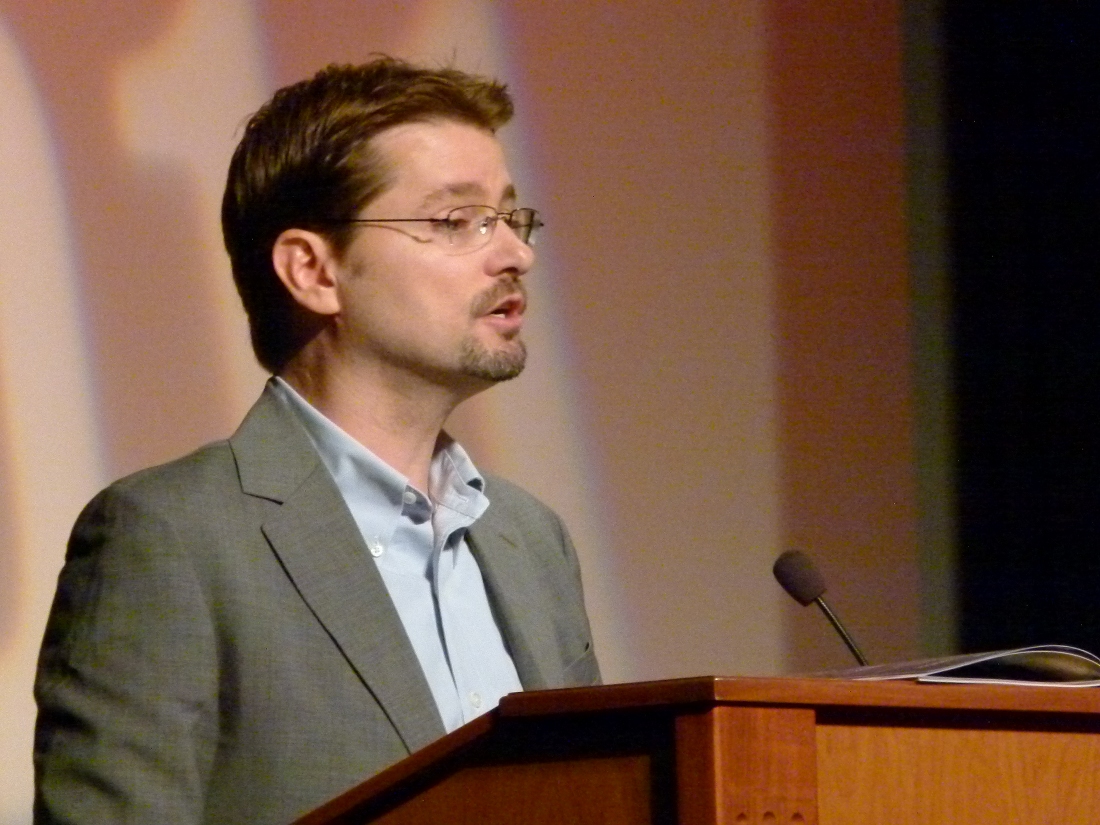 With all the awesomeness that is at TAM9, no one thought to get James Randi a stool to stand on for the podium. Then again, he wouldn’t be Randi if he used one… 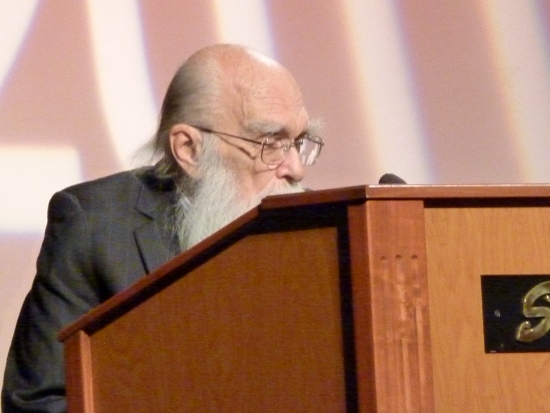 Randi states that JREF may be moving to Los Angeles — more media attention available at that site, among other reasons. The old office has closed (though the Isaac Asimov library will stay open in Florida).

He reminds us of an important message: “Skepticism must never devolve into cynicism.”

Michael Shermer is up to speak about his new book, The Believing Brain: From Ghosts and Gods to Politics and Conspiracies — How We Construct Beliefs and Reinforce Them as Truths

One thing we learn about Stephen Colbert (whose show Shermer was on earlier this week), he’s never out of character: 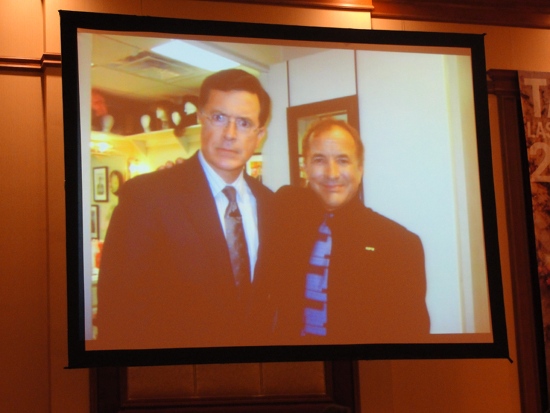 It looks like Shermer has done away with his usual PowerPoint slides, opting instead for a static image of his book/magazine while he talks. Probably for the best?

Shermer says that someone sold two shirts worn by Brad Pitt on eBay — one washed, one unwashed. Which one sold for more? Unwashed. Why? Maybe because they wanted to “essence” of Pitt, whatever that means. Why do we do things like that?

Similar question: Would you rather wear Hitler’s sweater or Mr. Rogers’ sweater? (Does it really make a difference…?) 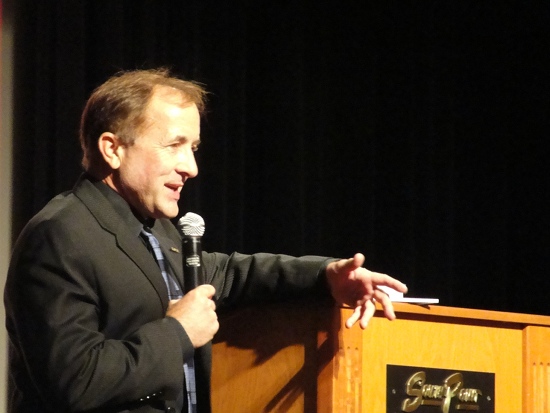 Shermer also mentions how he has a statement ready just in case it turns out God exists:

Rule for all speakers: Don’t give the TAM9 audience the same talk you would give the general public. We deserve more than that.

Next up: a panel discussion on Skepticism on TV, featuring James Randi, Richard Wiseman, Phil Plait, Joe Nickell, and MIchael Shermer. (Adam Savage of Mythbusters was going to be on this panel but he had to cancel.) It’s moderated by Sadie Crabtree.

Why on earth would they put Wiseman next to Plait? That’s just cruel…

No women on this panel. I don’t blame JREF for that, but we need to find a way to get more female skeptics in the media. 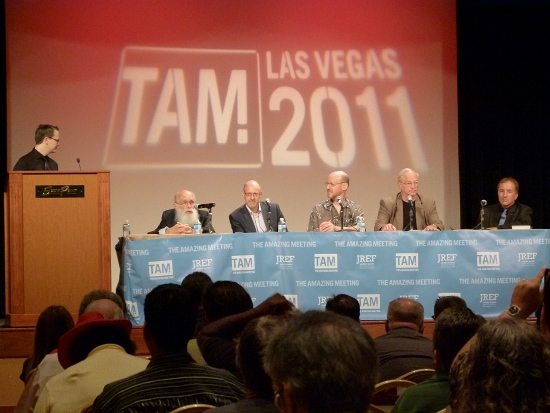 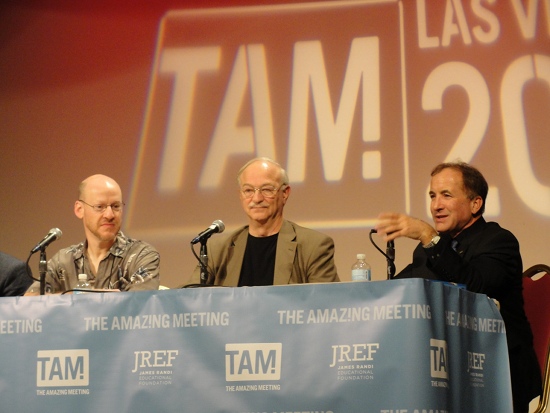 Phil Plait: It’s not that skepticism isn’t good enough for television, but producers have a very different idea of what makes for good television. They’d rather give away the JREF $1,000,000 than just put together a show where people who claim psychic powers try to win it (but always fail).

Richard Wiseman: “TV’s job isn’t to inform; it’s to get you to watch the TV program.” 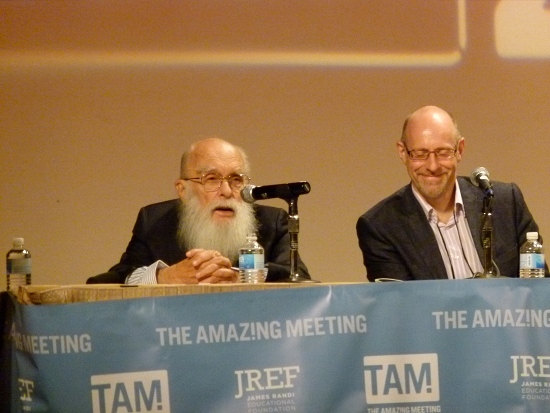 Sadie Crabtree asks: How do we get skepticism on TV?

Joe Nickell: A producer once asked his boss if he could use me in a segment. The boss said (paraphrased) yes, but make sure he’s not too convincing this time.

Phil Plait: Suggesting that you’re going to test urban legends (a la Mythbusters) has a better chance of getting on air than a show that actively seeks to debunk urban legends.

Sadie Crabtree asks: Are there any bright spots to skepticism on TV?

It also helps to make your own videos on YouTube and the like. You edit those yourself. You decide what gets said. It’s powerful.

Also, want to avoid getting quotemined? Cough during your remarks if you screw up. Or swear. Or speak in long sentences with lots of conjunctions. Make it so they can’t possibly edit you down any shorter.

Side note: Here’s a cool panoramic view of the audience, courtesy of @RichOrman:

Next up: Eugenie Scott to discuss the “Denialism of Climate Change and Evolution” 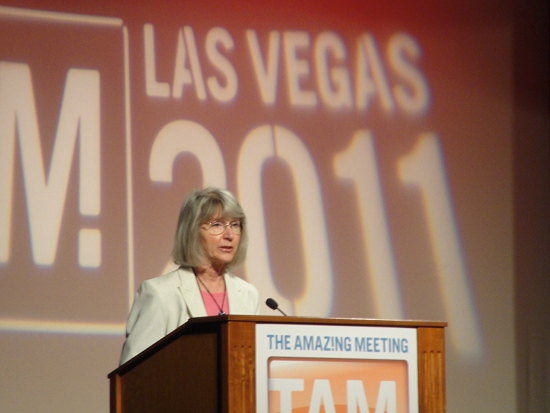 She mentions how the non-science side loves to quote their own scientists, which leads to this aphorism:

“For every Ph.D., there is an equal and opposite Ph.D.” (Obviously, it’s not true, but it seems to be the M.O. for the opposition.) 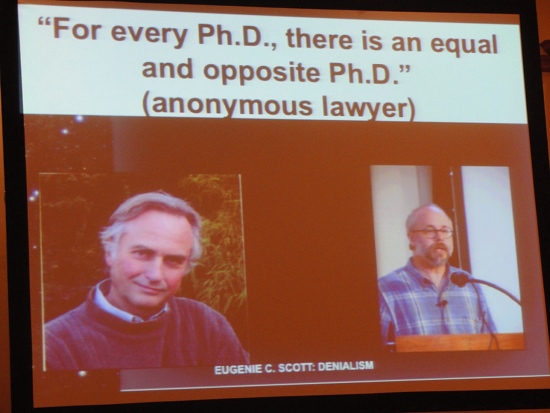 I love Eugenie Scott, but once again, I’m not hearing anything I haven’t heard several times before. It’s a great talk for the general public, but it’s preaching to the choir at TAM9.

One positive note: NCSE is going to expand their reach to help protect educators against climate change denialists. They’ve already recruited a climate scientist to help with the efforts. 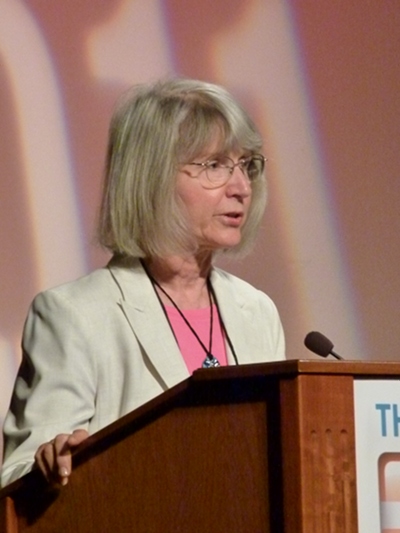 Next up: Lawrence Krauss on “Richard Feynman and the value of science.” 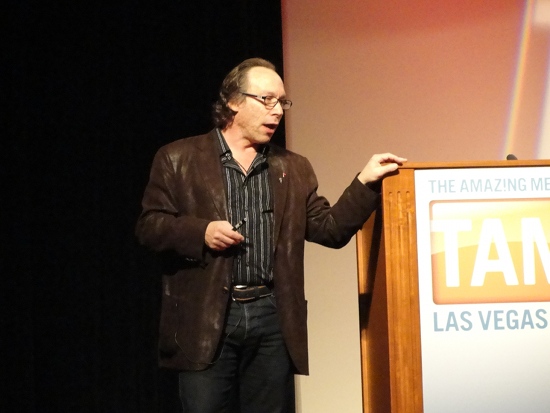 Truth: Feynman taught himself integral calculus at the age of 12. I think I was watching Duck Tales around that time.

Truth: Feynman fell in love as an undergraduate. He learned a lesson in that relationship: It doesn’t matter what people think; it matters what reality is.

Truth: Feynman had the highest physics scores of anyone applying to Princeton, but he had the lowest English scores. (He’s not perfect! There’s hope for all of us!)

A message to young people: It takes all types in science. You don’t have to be a certain kind of person to do it or contribute to scientific knowledge.

We end the talk with a video of Feynman talking about himself.

Incidentally, there was some drama with Krauss a few months ago, but it doesn’t seem to have affected interest in his talk here. No walkouts or anything of the sort. 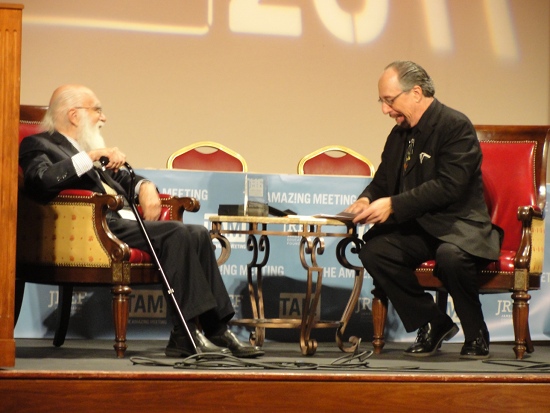 Project Alpha was (in short) when two magicians (Michael Edwards and Steve Shaw, better known as Banacheck) posed as psychics for a paranormal experiment. They were so good, the researchers believed their powers were real. Later on, the hoax was revealed.

Edwards and Shaw have now joined Randi on stage for the first time in nearly three decades: 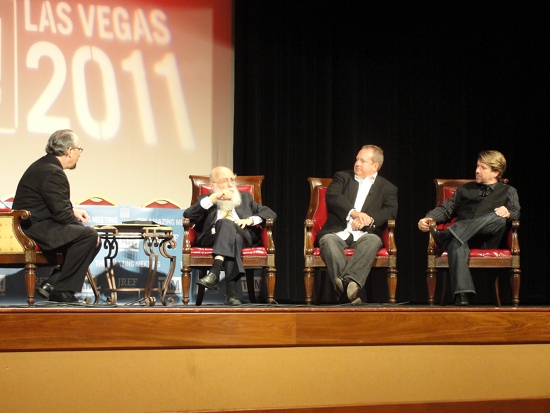 We’re hearing a lot of anecdotes about how they fooled the researchers. It sounds easy to do in retrospect, but keep in mind that one slip-up could have ruined the whole plan.

This retrospective makes sense if you knew about Project Alpha beforehand, but I’ll admit to never hearing about it until about 4 minutes ago. It’s like a cast reunion for a show I never watched. It might be interesting to a handful of people, but I’m not one of them. I don’t know how many people in the audience are interested, either. That said, most of us would probably listen to James Randi tell stories all weekend, so maybe it’s all a moot point.

Time for lunch! Be back in a couple hours, when Jen McCreight will take over the blogging for a while!

The afternoon session can be read here!