Foundation Beyond Belief Raised Over $30,000 During the Past Quarter July 9, 2011 Hemant Mehta

Foundation Beyond Belief Raised Over $30,000 During the Past Quarter

The 830 members of Foundation Beyond Belief raised over $30,000 for our ten beneficiaries in the Second Quarter of 2011.

Incredible. It’s the most money we’ve ever raised in one period. 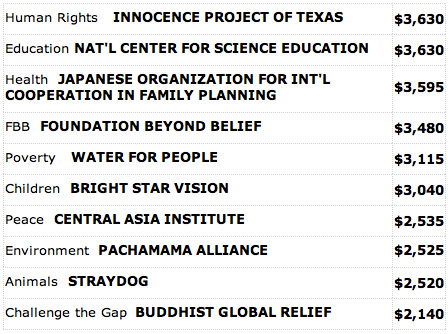 I think the fact that the Challenge the Gap beneficiary received the least amount of the money, but still a significant amount (7% of total giving), shows that the CtG idea is working. People who don’t want to give to a religious organization doing purely secular work are choosing not to, but most people don’t seem to mind.

We’re currently taking suggestions for our Fourth Quarter charities if you’d like to chime in!

In the meantime, consider becoming a member. There are incentives if you join up this month!

July 9, 2011 The Easiest Get-Rich-Quick Scheme
Browse Our Archives
What Are Your Thoughts?leave a comment