Their latest is no exception: 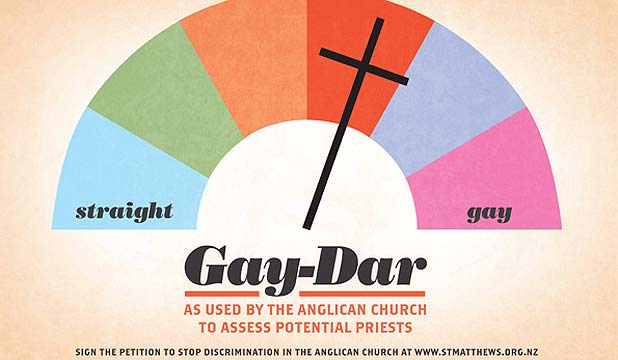 Before you all start making jokes about gay priests and Anglican-on-Anglican action, understand what the purpose of the billboard is:

St Matthew-in-the-City put up a billboard outside its central Auckland church yesterday, designed to call attention to what it said was discrimination by the Anglican Church.

St Matthew’s vicar Glynn Cardy said New Zealand’s Anglican bishops refused to ordain anybody who was openly gay or lesbian and in a committed relationship. “We see this as an issue of discrimination that harms not only the gay and lesbian community, but society and ultimately the church as well.”

St Matthew’s associate priest Clay Nelson said it was incredible that the church could still argue sexual orientation was a choice.

“It appears justice is being held hostage by ignorance. We call on the bishops to enlighten the church and end this discrimination.”

You know, if they only stopped believing in all the superstitious nonsense contained in the Bible, I would support them whole-heartedly. But I suppose there’s something to be said about being a lesser evil, better than the typical Christian alternatives.

But they’re still wrong when it comes to belief in a god. Too bad, because everything else they seem to support sounds great.

(Thanks to Sam for the link!)