Don’t Do This To a Anti-Gay Christian Preacher June 30, 2011 Guest Contributor

Don’t Do This To a Anti-Gay Christian Preacher

When an anti-gay Christian preacher is spouting his/her hate speech, there are clever ways to strike back… 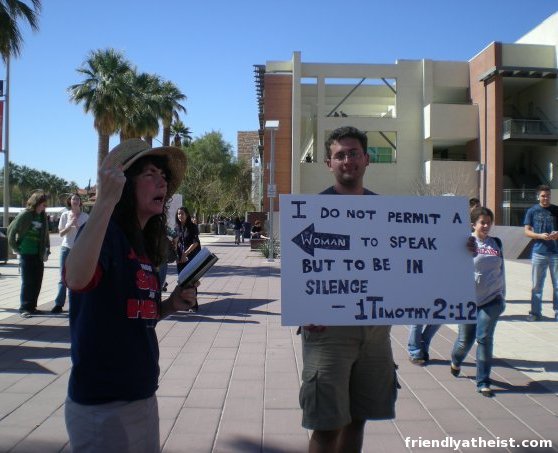 There are even scandalous ways to strike back… 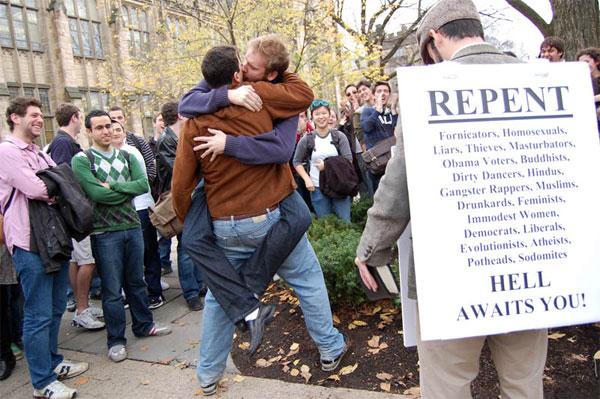 … but you don’t want to actually touch/harass the preacher.

… Parker admits she kissed a preacher on the cheek at the event, proclaimed by the Salisbury mayor as Lesbian, Gay, Bisexual and Transgender Pride Day.

“He was just waving his arms and has a Bible in one hand, up and down, and screaming at the top of his lungs, ‘sodomites’ and ‘you’re going to hell,'” Parker said in a phone interview. “I thought he needed a hug. So I gave him a hug.”

At some point, Parker said, the preacher turned to yell to a man with a camera to take a picture of her. Also at some point, she kissed him. On the cheek, she says, not on the mouth.

“She might disagree with this, but it wasn’t done as a show of affection,” [police chief Rory Collins] said. “It was an unwanted touching.”

Hate to say it, but Collins is right. Parker overstepped the boundary and shouldn’t have done that.

It’s public property. Kiss your partner all you want. But don’t touch someone who’s not asking for it.