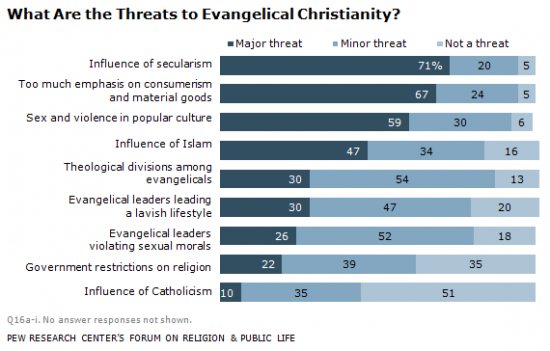 Should I break out the party hats?

Funny, though. I would’ve said the biggest threat to Evangelical Christianity is their stubbornness when it comes to issues of homosexuality, women’s rights, and science education. While the rest of the country gets more enlightened, they insist on staying in the dark.

There’s hope that younger Christians see through some of the bullshit, but I rarely hear about Christian youth groups fighting for same-sex marriage, against Intelligent Design/Creationism, and for the right of women to have abortions. They have an obligation to do those things because it’s their religion that remains the biggest obstacle in each area. If they remain silent, or take a wishy-washy stance that doesn’t challenge their church’s teachings, they’re no better than the so-called “leaders.”

A few other notes:

The rest of the results are here. Read through it and prepare to be horrified.