Well, members of the Pennsylvania Nonbelievers were joined by American Atheists president Dave Silverman on Friday during a protest outside Harrisburg’s City Hall: 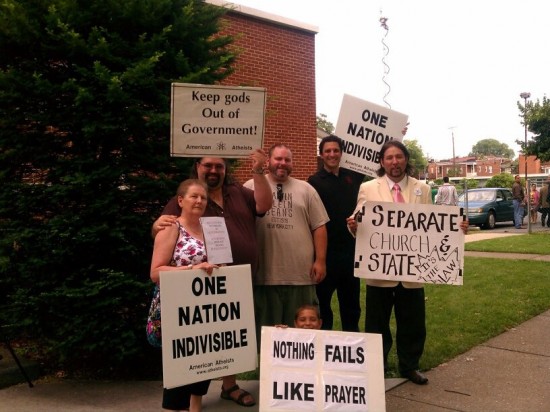 Justin Vacula has done a nice job covering the issue at Examiner.com. He spoke to both the protesters and government officials:

One of the main criticisms from atheists was that Thompson was calling for prayer and endorsing religion in her official station as a mayor. [Pennsylvania Nonbelievers board member Jason] Fegley notes that he would not have a problem if Thompson went to church or prayed for Harrisburg in her private time. Fegley objects to Thompson’s endorsements of prayer because they were made in an official capacity while she is supposed to be working for the city instead of endorsing prayer.

Bob Philbin, the acting communications director for Harrisburg, was contacted to comment on the controversy. Philbin says that the prayer and fasting was “not at all exclusionary” because the prayer and fasting was “open to the public and was not just for members of any particular denominations.” When asked to comment on criticism from atheists who said that prayer was exclusive to religious people, Philbin said that non-believers could have participated in other ways such as meditating or participating in moments of silence.

I would add to what Jason said. My problem isn’t just that she was praying in her capacity as a mayor. I’d be concerned if, even as a private citizen, she thought prayer was a legitimate way to fix her city’s current crisis. It’s not and Thompson needs to find a better solution.

On Friday at 4:00p, a time you would expect Mayor Thompson to be hard at work trying to do something about the problem, she was instead giving a sermon at a local church. (You can see video footage of her speech by clicking on the image on this page.)

“I tell God everyday that I am honored that he chose me to be the head of this city and to be able to pray for the people in which God has called me to serve… [my] goal is to serve God to serve the people. That’s precisely why I’m here [at church] today -– to serve God… prayer has worked for me. It will continue to work as long as I keep my faith and focus on the immenseness of God. I know God is omniscient and omnipresent… and this is why I stand here lifting Him up because there is [sic] some things that man can’t do for me that God has shown me he can and I will continue to acknowledge that in all the things I do…”

Is she a pastor or a mayor? Either way, she’s pretty damn ineffective as a leader. No wonder the atheists were upset. They want to see her salary going toward something… well… useful.

David Silverman, president of American Atheists, says that people should not give Thompson “a bye” by simply ignoring what he believes is an obvious violation of separation of church and state. Silverman, commenting for this article, noted that Thompson is “doing this as a public spectacle, diverting attention, and trying to keep her job using Christianity.”

What I can’t understand is why there isn’t more of an uproar from the non-atheist crowd. Surely there are theists in Harrisburg who don’t want to see Thompson proselytizing while on the clock and find her actions petty and useless. They’d rather see her tackling the problems, working with experts, and getting the city council to enact realistic solutions. Where are these people? Why weren’t the joining the protest? Why aren’t they visibly angry? (If they are, I’d love to see links about them in the comments.)