Why Should You See The Ledge? A Guest Post by Matthew Chapman June 24, 2011 Guest Contributor

Why Should You See The Ledge? A Guest Post by Matthew Chapman

What would a movie look like if it was directed by an atheist? If it had characters who were atheists? If it included conversations we’ve had with religious people?

That’s a clip from The Ledge, a movie that premiered at the Sundance Film Festival and is slated for a test run in two theaters next month. If it does well there, we could be seeing the movie open nationwide. 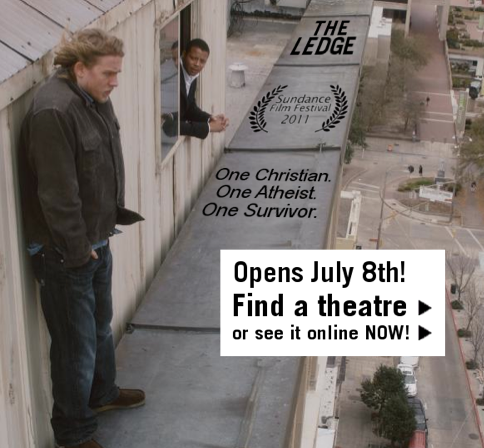 The movie is written and directed by Matthew Chapman, notable for authoring 40 Days and 40 Nights: Darwin, Intelligent Design, God, Oxycontin®, and Other Oddities on Trial in Pennsylvania… and for being the great-great-grandson of Charles Darwin.

I asked Matthew if he could tell me more about the film — and why atheists should see it — and he offered this exclusive commentary:

The Ledge is a thriller in which an atheist comes in conflict with an evangelical Christian and ultimately… well, you have to see the film. It stars Liv Tyler, Terrence Howard, Patrick Wilson, Charlie Hunnam, and Chris Gorham and was selected from over a thousand films to be in the main competition at this year’s Sundance Film Festival. It keeps you on the edge of your seat. It’s emotional.

And it is clearly pro-atheist.

The Ledge opens for a test run in two theaters on July 8th, one in New York, and one in Los Angeles. If the two theaters sell out the first weekend, the distributor will consider a nationwide release. The future of The Ledge therefore depends on the two cities where it least needs to be seen. I want The Ledge to open in the smaller towns across America where religion is a real force that affects people’s daily lives. Only then will it get covered by local media, provoke debate, and reach the people who aren’t usually exposed to our philosophy. It can cross over. It is a thrilling and entertaining movie as well as advocating our views.

Having the more intellectually defensible position, atheists understandably try to persuade through intellectual argument. But if you want to convert believers, you have to speak their language. The appeal of religion is not intellectual; it is emotional. The further out you go — into the country, into the mega-churches, into extremism — the more emotional it becomes. Intellectual arguments do not tend to change these people.

The Ledge can. Here are two small stories from among several similar ones:

When I screened the film in Sundance, there was a group of Fuller Seminary students in the audience. After the screening ended, one of them, a woman, stood up with tears streaming down her face and said, “I want to apologize for all the harm my faith has done to you.” The consequences of religious cruelty — seen in dramatic form in the film — had touched her. I am not saying she became an atheist, or ever will, but that her views shifted in some significant way was beyond question.

Someone I know has a fundamentalist mother with a gay nephew. Since he came out five years ago her mother has refused to speak to him. My friend saw The Ledge and persuaded her mom to do the same. The Ledge contains not just an outspoken atheist, but a gay man with whom he lives. This man is maligned by the fundamentalist in the film and, to his great disappointment, let down by his own religion. As the end credits rolled, the woman picked up the phone and called her nephew to reconcile with him. Again, I am not saying she left her church, or that she ever will, but a real and significant human change occurred as a result of the film’s appeal to the emotions.

I am not embarrassed to be using emotion to make our argument. After all, the consequences of religious irrationality and intolerance are emotional. Women suffer when religion forces them to lead demeaned lives. Gay people suffer when they are denied their human rights or are ostracized because of religion. And mothers, fathers, brothers and sisters suffer when their relatives get killed in religious wars.

We have been making our intellectual case since before Jesus was born. If we want to succeed, we must also appeal to sentiment, to compassion, to emotion. Film is a great medium for this, perhaps the best. The Ledge can be the first of several feature films to question faith in this way — or it can be the last for a long while. When Passion of the Christ was supported by Christians and did well, other faith based movies followed. If The Ledge succeeds, the same principle will apply and a door will open.

EVERYTHING depends on you. Are we less passionate about our convictions than Christians, or can we equal or even better them in terms of our relative numbers? And by the way, I’m not asking you to “eat your broccoli.” The movie is a thriller. I have yet to see a single person leave the theater once the film started. Liv Tyler is beautiful and marvelous in it. Charlie Hunnam is gorgeous. Patrick Wilson, Terrence Howard, and Chris Gorham are brilliant. All I am asking you to do is: go to the movies! Support a film that supports your views.

I believe the film will run for quite a while in New York and LA, but initially the important days are Friday July 8th, Saturday July 9th, and Sunday July 10th. If we can just do this — fill two theaters for three days — it will be reported the following Monday that an atheist feature film succeeded. And that will be a real cultural game changer.

The two theaters are:

The Sunset 5 in West Hollywood, CA.

If you don’t live in Los Angeles or New York tell your friends there to go see it. Because of the film’s unusual release pattern, you can also already get it on VOD (just search “Ledge”), or rent it online from iTunes.

To watch clips, to read reviews and articles, or to see how you can help the movie, visit our website.

If you’ve had a chance to see it, feel free to leave your reviews in the comments.