The Hypocrisy of Ruben Diaz

The Village Voice‘s Steven Thrasher just had this jaw-dropping interview with him: 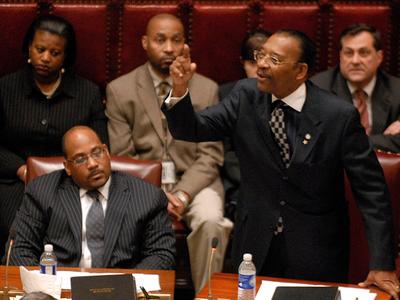 All right, let me ask you about this. You believe marriage is between one man and one woman, yes?

Yes [laughing] So? Why are you asking me this? You know that, you know what I believe. Why are you calling me? Marriage is between a man and a woman.

But you yourself have been married twice, and are divorced.

So do you believe it is alright to be divorced?

You think you are wrong, then?

When I got divorced, I was wrong, yes. Why are you asking me this?

But you believe that gay marriage is wrong and divorce is wrong, but that you should be allowed to get divorced and remarried, and gay people shouldn’t be able to marry at all.

When I got divorced, it was wrong, but marriage is between a man and a woman.

So is being divorced OK with your religion?

No, it is not OK. Gay marriage is still wrong. This is what I believe.

Diaz must be incredibly flexible to do all those mental gymnastics.

So apparantly marriage is actually between one man and a succession of women.