Thanks the Medical Experts, Not God June 23, 2011 Guest Contributor

Thanks the Medical Experts, Not God

“I tried to hang onto rocks, but the waterfall took me toward it,” recalls Cody, whose cries for help couldn’t be heard over the thundering cascade. “All I could see was green. I closed my eyes, was just lying in the water and waiting. I knew my dad would come get me.”

Scary stuff. The good news is that he’s ok, currently in a hospital, and expected to make a full recovery.

So how did he make it out alive? His dad has an explanation:

“It’s a God thing. I would never have said that four days ago,” said Cody’s father, Kevin Grundstrom, 40, on Wednesday. “But if you could have seen that water. …”

The newspaper’s headline writers jumped on that, too: 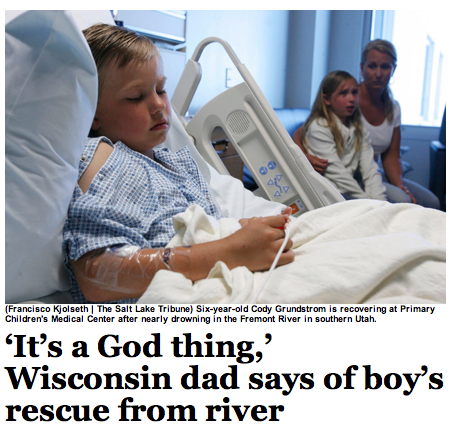 And yet, if you read on to the very next paragraph, there’s a perfectly rational explanation as to why Cody was saved:

In Cody’s corner: the timely arrival of his parents, the alert sounded by his sister and the luck of having two trained emergency responders from Salt Lake City nearby. Talli Torgersen, an emergency-room nurse at Primary Children’s, and her husband, Jay, a fire captain with Unified Fire Authority and expert in swift-water rescues, were at the falls with their own children.

Talli Torgersen said it took 30 seconds of chest compressions before Cody vomited and two to three minutes more until he could breathe on his own.

He was still unconscious when they strapped him to a lawn chair and carried him to the Torgersens’ vehicle, in which they had an IV kit. Ten to 15 minutes later, a ranger arrived with oxygen.

With Cody so well-cared for, “By the time the ambulance arrived, there was almost nothing more they could do,” said Jenney Grundstrom, who flew with Cody to Primary Children’s in a helicopter.

“Those two people saved Cody’s life.” Yes! Those two, not a god! They’re the ones responsible for saving Cody! God had nothing to do with it! Doesn’t the dad see that he’s contradicting himself?! And why is the newspaper playing along?! And why is the girl from Twilight writing this article? (Oh. Different spelling. Got it.)

While we’re at it, if God is responsible for saving Cody, then God also deserves the blame for letting six other children drown in Utah over the past month, right?

How come that’s not mentioned in the piece?

The commenters on the Salt Lake Tribune‘s site are weighing in, too, and they’re rightfully harsh:

I know: I’m being a jerk. This is a feel-good story about a boy who nearly lost his life but was saved… and I’m making it all about god. But someone needs to state the obvious and it’s clear the newspaper won’t do it.

(Thanks to Karen for the link.)

***Update***: It looks like the headline has changed since this posting went up… 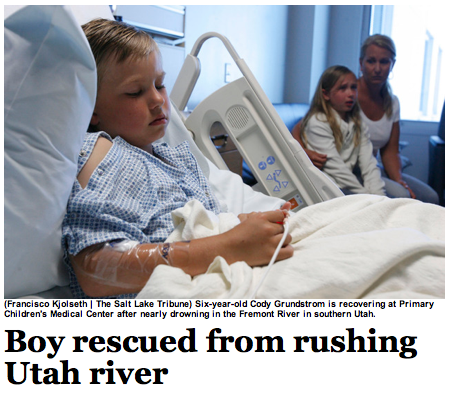 June 23, 2011
No More ‘Belief in God’ In School District’s Value Statement
Next Post