If I asked you what came to your mind when I said the word “homosexuality,” what would you think of?

I would think of how my gay friends still can’t get legally married in most states, how I’m hoping to attend the Chicago Pride Parade this weekend to show my support for the LGBT community, and about a gay friend I saw a couple weeks ago.

If you ask the Illinois Family Institute’s Laurie Higgins what comes to mind when she hears that word, guess what her answer is?

Lots of sodomy, in any case.

Here’s the backstory: A local middle school invited speakers to talk to students about “the dangers of gang life, drugs, bullying, dropping out of school and other consequences of negative choices.”

Doesn’t sound like a problem… aren’t those things we want children to learn? Don’t do drugs, don’t be a bully, don’t drop out of school? Hearing it from people who suffered because they did those things can be incredibly effective.

Two of those speakers also told the students they were gay.

(I don’t know the context of their statements, but I could easily envision a scenario where the speakers were bullied or started doing drugs or had to drop out of school because of harassment they faced due to their sexuality, and that’s why they brought that up.)

The principal of the school backs up that theory:

[Principal Tom] Springborn said that because the topics that the two homosexual speakers were there to discuss were bullying and drug use, and because the speakers just mentioned but did not discuss at length their homosexuality, parents did not need to be notified ahead of time.

In any case, IFI cannot believe they would say such a thing without giving parents proper notification ahead of time. Imagine: REAL LIVE GAY PEOPLE! [Cue creepy background music.] Do we really want to expose children to… other human beings?!

So what’s the problem with people saying they’re gay?

When the two speakers announced that they were homosexual, they brought the image of two men having sex to the churning minds of a roomful of adolescents. Middle school students are completely justified in finding the idea of two men engaging in anal or oral sex repugnant, and sometimes children and adults laugh about ideas that make them uncomfortable and which they find offensive. Government employees have no right to expect or implicitly suggest that children not find the idea of two men having sex repugnant. Deviant sexual acts should not be respected, and school employees have no right to imply that they should be.

So two gay guys talk about how they were bullied and/or did drugs and why the students shouldn’t do those things… and Higgins acts like they were teaching the kids the best sexual positions.

If there was ever a difference between Christian conservatives and the rest of us, there it is. For me (and a lot of other atheists and liberal theists), sexual orientation is about a lot more than sex — it’s about love, it’s about civil rights, it’s about following your heart, it’s about being able to start a family, it’s about GLBT people having the same opportunities that I do as a straight person.

For them, it’s strictly about sex. Icky sex. Sex they don’t want to think about. (In true form, Higgins also compares homosexuality to incest…)

She thinks kids shouldn’t even be exposed to the idea that gay people exist until some undetermined age: 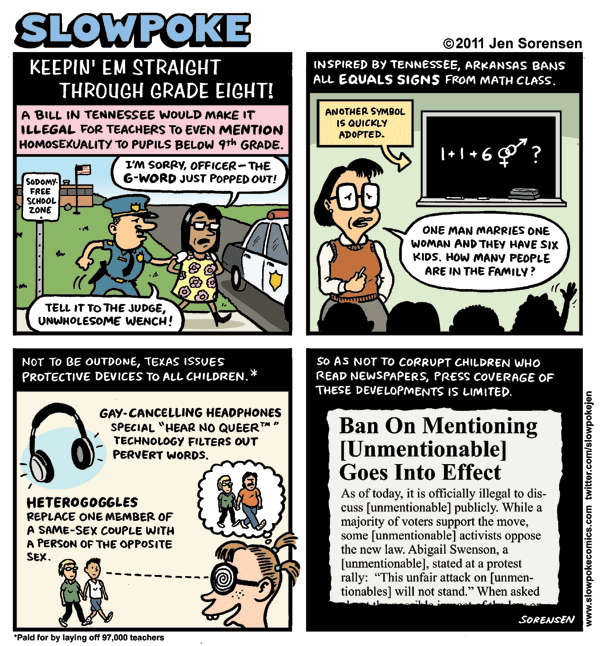 And it wasn’t just the speakers saying they were gay that upset Higgins.

It’s that they said they always knew they were gay!

(I know, I know. My jaw dropped when I read that, too. I always thought they just flipped on the gay gene sometime in college. Whoops!)

The two homosexual speakers did not merely announce that they were homosexual — which I would argue is no small thing in and of itself. They also said that they have always known that they’re homosexual.

Such a statement implies biological determinism. Were the [middle school] students also told there is no scientific evidence proving that homosexuality is biologically determined? Were students told that many immoral impulses emerge at the earliest ages? Were they told that childhood molestation could cause, in the words of a therapist who appeared on Oprah, “sexual orientation confusion”? Were students told that early molestation might result in “sexual orientation” confusion at such a young age that someone may not recall a time when they didn’t feel attracted to their same sex?

Got it, gays? IFI is onto you. They know you were molested as a child.

Of course, Higgins offers no links to citations to back up her statements and doesn’t even mention who this therapist is — saying the therapist appeared on Oprah is hardly a badge of honor. Oprah promoted The Secret, for fuck’s sake…

There’s a little more to the story than just this — a teacher may have overstepped her boundaries when speaking with a child, though it’s hard to tell since we never heard her side of the story. That’s the secondary issue, though.

The primary issue is that IFI is outraged because one parent of a 7th grade child didn’t like that people said they were gay around her son… We’re given no context as to why they said it.

They just don’t want children finding out they exist.

June 22, 2011 Atheists Gather for Chicago Gay Pride Parade
Browse Our Archives
What Are Your Thoughts?leave a comment