Is It Bigotry To Not Vote for a Mormon? June 20, 2011 Guest Contributor

Is It Bigotry To Not Vote for a Mormon?

Last week, I was part of a religious roundtable discussion for the Chicago Tribune — they wanted people representing different faiths (and no faith) to talk with some staffers about the paper’s religious coverage.

At one point, we introduced ourselves, saying our name, who we represented, and the message we wanted to get across.

One of the people representing a let’s-all-get-along organization said as one of her goals (I’m paraphrasing): As this election season gets underway, I want to make sure people are not attacked for their religious faith.

She was suggesting that Mitt Romney‘s Mormonism, for example, shouldn’t be held against him. If you want to go after his policies, fine, but don’t attack his faith.

That sounds like a perfectly reasonable stance. The Constitution says we don’t have a religious test for public office, and people have the right to believe whatever nonsense they want. Maybe a couple years ago, I would’ve said the exact same thing.

The more I thought about it, though, the angrier I got…

So I spoke with her after the event was over. This is basically what I said:

Let’s say Mike Huckabee is running for president. He’s an Evangelical Christian. Because of that label, I already know certain things about him. I know where he stands in regards to evolution, and I can’t trust him to support good science. I know where he stands on abortion, and I can’t trust him to protect women’s rights. I know he believes homosexuality is immoral and I can’t trust him to fight for civil rights for the LGBT community. So, yes, knowing Mike Huckabee is an Evangelical Christian is all the information I need to make a decision about him. I don’t need to know the rest of his politics. I’m going to hold his faith against him by not voting for him.

(Remember when three Republicans raised their hands in a 2007 debate, admitting they don’t accept evolution?) 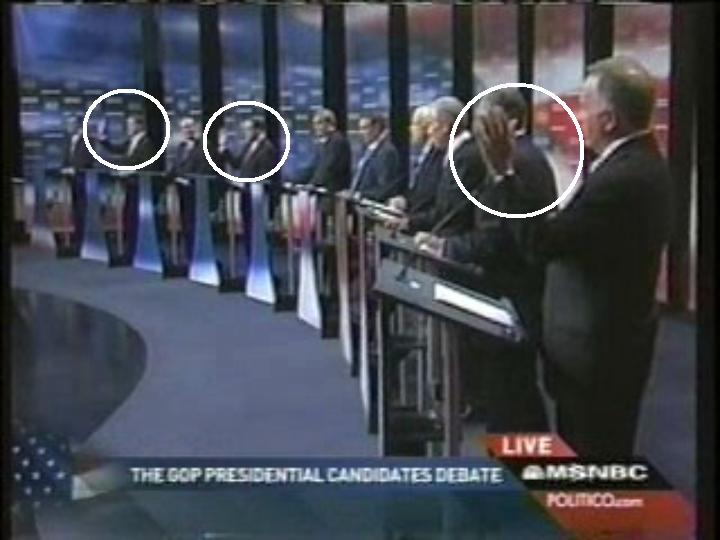 The same train of thought applies to Mitt Romney. There are plenty of reasons not to vote for him, but because he’s a devout Mormon, that means he accepts Mormon doctrine (if he doesn’t, I don’t recall him saying so). Because of that, I have to question his judgment. Is he really the person I want in charge of my country?

I know Barack Obama is openly Christian, but I trust him to separate church and state when necessary. It’s part of the reason I voted for him in 2008. In some cases, he’s let me down. But on certain issues, he’s stood against what we know as Christian doctrine.

Last year, I wrote this, and I still stand by it:

Do you really want a president who could launch a nuclear attack… who also believes he/she will be in “God’s glorious presence” in the afterlife?

Do you really want a president who can appoint important positions in the field of science like the head of the National Institutes of Health… who also believes the Earth was created about 6,000 years ago and that evolution is a lie?

Do you really want a president who has the power to veto legislation regarding women’s health care… who also believes abortion is equivalent to murder and that life begins at conception?

I wouldn’t feel comfortable voting for those people. It has nothing to do with the labels they give themselves and everything to do with what they will do with those beliefs. I want a president who makes decisions after hearing from experts on the issue, not after hanging up on a conference call with a group of pastors.

This is why I flinch when candidates use their faith as a reason to vote for them. I don’t really care if they belong to a church as much as I care how much they’re really guided by their religious beliefs.

I would hope the label “atheist” wouldn’t be used to prejudge a political candidate, but we know it happens, even though atheists have no “doctrine” to follow. To me, someone who calls herself an atheist is a person who looks at the evidence and acts rationally (instead of resorting to the supernatural). To most Americans, ignorant about what the word means, atheism is synonymous with having no morals or values.

Meredith Heagney makes that case in an article for The Columbus Dispatch:

That may be because of viewpoints such as the Rev. Mark Fuller’s. Pastor of Grove City Church of the Nazarene, an evangelical congregation, Fuller said he would vote for a Mormon or a Muslim before an atheist.

“This nation was built on Christian principles,” he said. With increasing secularism in our culture, “we’ve taken this thing a little too far (in) the other direction.”

Americans care about whether their president is religious because we use faith as a stand-in for morals or values, said Mark Caleb Smith, director of the Center for Political Studies at Cedarville University, an evangelical college east of Dayton in Greene County.

I don’t feel like a bigot for dismissing religious candidates. I’m not against them because of the religious label they use. It’s how serious they take those beliefs that worries me. Even if Obama is a Christian, he’s not someone who makes a big deal of it (unless he’s trying to win political points). The current crop of Republican candidates, on the other hand, include a lot of people who take pride in their faith and are guided by it… and that’s frightening.

On Friday, Bill Maher explained exactly why guys like him are not people we want in public office (2:13 mark):

… [Perry] also says ‘some problems are beyond our power to solve.’

What?! I thought we were the can-do people!

And if Perry thinks only god can solve our problems, why is he even in government? Why doesn’t he just stay at home and light a bunch of candles like Sissy Spacek’s mom in Carrie?

Here’s an opposing view: Not only are our problems not beyond our power to solve, they’re actually fairly easy to solve…

***Edit***: I forgot to mention the girl’s response to what I said. She nodded in agreement. I think she was thinking on a more superficial level, like someone saying “I’m not voting for Romney because he’s Mormon and for no other reason.” I’m against that, too.

June 20, 2011 Ask Richard: Atheist Husband and Father Continues to Go to Church
Browse Our Archives
What Are Your Thoughts?leave a comment