Are Atheists Right to Complain About ‘Seven In Heaven Way’? June 20, 2011 Guest Contributor

Are Atheists Right to Complain About ‘Seven In Heaven Way’?

One of the hardest things about being an atheist is standing up for what’s right even when it’s unpopular. And there’s nothing more unpopular than trying to take away an honor reserved for seven firefighters who died on 9/11.

The problem is: To honor those firefighters who were assigned to Engine 202 and Ladder 101 firehouse, who were among the first to arrive on the scene after the Twin Towers were first hit, and who died as a result of their actions, a new street sign is now going up outside the firehouse: You can imagine the emotions present when they put this sign up:

Teary-eyed widows, dozens of uniform-clad firemen and civic leaders paid respects outside the firehouse at the intersection, explaining the men were killed while pulling victims from burning rubble.

“They are heroes and should be rewarded in a place like heaven,” said Tom Miskel of Community Board 6, which unanimously supported the name change in December 2009.

They are heroes, yes.

Let’s get the truth out of the way because it’s uncomfortable for most people: To say they’re getting an eternal reward for what they did is a lie. They died and they got no reward for their sacrifice.

Still, their actions ought to inspire us — these seven firefighters put their lives on the line to save complete strangers. It’s a selfless act that no one should ever have to make but they did it. They should be memorialized.

But is this the right way to do it?

Cue the atheists to rain on the parade:

“It’s improper for the city to endorse the view that heaven exists,” said David Silverman of American Atheists. “It links Christianity and heroism.”

Local atheists also insisted that public signs should be non-sectarian. “It falls under the umbrella of Church and state,” added Ken Bronstein of NYC Atheists.

“It crosses the line,” Bronstein said.

I don’t know whether to blame Ken and Dave for giving such blunt, not-politically-correct responses… or the newspaper for using excerpts from what may have been longer, better comments.

On the American Atheists website, Dave Silverman explains his thinking a little more thoroughly… but it still doesn’t help his cause:

Named “Seven in Heaven Way”, the street uses the tragedy of [9/11] to legitimize Christianity by asserting that Heaven is a real place, and that all these heroes are actually there. Now, I am not sure if all seven of the named firefighters were Christian, or if they were “good Christians”, but that’s not relevant. What’s important to remember here is that these men died in a religious attack against ALL of America. The Muslim extremists attacked the Constitution, not just the Towers and the Pentagon.

Breaking our own laws undermines us, even if it’s only the name of a street. As we approach the 10th anniversary of 9/11, we will see preachers and their politicians trying to make Christianity the victim, and to vilifying anyone who screams foul.

These heroes died FOR our Constitution, and breaking the Constitution in their memory should make any patriot shudder. Call it “Seven Heroes Way”. Call it “Remember Seven Way”. But leave Christianity out of it — it wasn’t involved.

Even though Dave and Ken are absolutely right, they’re coming off looking like ungrateful jackasses.

Speaking of jackasses, John Del Signore at Gothamist explained the atheists’ comments this way in a poor attempt at humor:

… how many heroes has atheism produced? Christians have Joan of Arc, big George the dragon slayer, Kirk Cameron. Atheists have Mao Zedong and Bill Maher — not exactly hero material, so you get why they’re a little jealous. 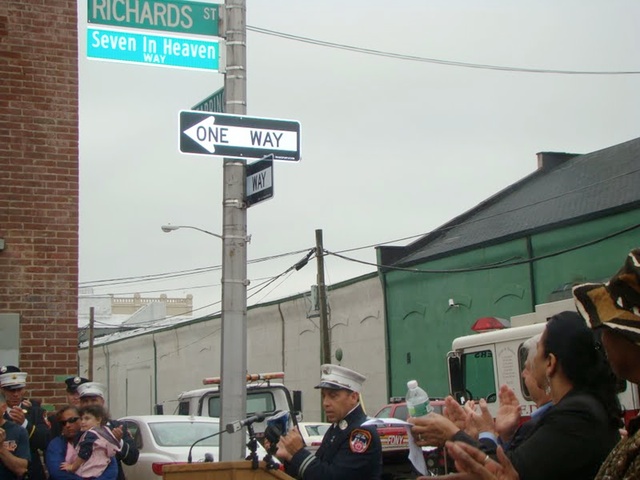 This has nothing to do with jealousy. Atheists give their lives in defense of our country all the time.

What should be done here? First, let’s answer some questions.

Were all the firefighters Christians? Did they all believe in Heaven?

According to The Brooklyn Paper, “It is unclear whether the firemen were all were religious, although most either attended Catholic school or had weddings at churches.”

If even one of those firefighters wasn’t religious (or only played the part to please family members), this sign does that person’s memory a disservice. Let’s honor what they did, not some supernatural location they might have believed in. That’s what they’ve done in other similar situations:

In Brooklyn, most street dedications — Ed Rogowsky Way in Park Slope, for example — pay respect by simply noting the honoree’s name, although petitioners get more creative when groups of honorees are involved.

Does it even matter if they were all religious?

No. Even if they were all Bible-thumping fundamentalist Christians, we should honor them for their sacrifice and not their religious beliefs. At the very least, tax-payers should not be footing the bill to promote the concept of Heaven.

Was it a nickname that they were known by?

It may have been:

City Councilmember Sara González shepherded the street sign change through the city council, and we asked her spokesman Mike Schweinsburg if it’s appropriate to use city resources for a sign with religious overtones. “The seven heroes have long been known as the ‘Seven in Heaven,’ ” Schweinsburg tells us. “That’s something that we didn’t have any hand in, it is the way the community and their families chose to remember them. So if that is their desire then we are happy to continue to remember them in the way that their family and fellow firefighters prefer to call them.

Even if that was their nickname, it’s not the only way for the government to honor them. Schweinsburg acts like they had no other choice.

What about Seven Heroes Way? Or Seven Sacrifices Way? Or anything else that honors them without causing legal problems?

Again, this was probably a decision made by someone who didn’t really give a second thought to the word “Heaven.” But the line has to get drawn somewhere, and if they had simply called it “Seven Heroes Way,” no one would be complaining.

It doesn’t look like it’s going to change, though. Caitlin Dickson at The Atlantic Wire points out we’d probably lose a legal challenge:

Victor Kovner, a First Amendment lawyer weighed in on the debate, telling the Brooklyn Paper, “the area of religion is so complex and nuanced that you could argue nearly anything. But a [legal] challenge in this case would be far-fetched.”

Even if we could win, it may not be a strategic thing to take on. The risk is huge and the benefit is minimal. The headlines would incorrectly portray atheists as ungrateful for the sacrifices made on 9/11, not as people appreciative but merely concerned about church/state separation.

The atheists are right, no doubt about that. But in the world of PR, they’ve already lost this battle.

June 21, 2011 Give a Man Enough Rope and He'll Eventually Hang Himself
Browse Our Archives
What Are Your Thoughts?leave a comment