Here’s the clip from this morning’s “Fox & Friends Weekend” talking about the church vandalism story:

I didn’t realize the segment would be so short! You can tell I tried to get in that last line at the end… I also wish I had said the site’s name or mentioned Foundation Beyond Belief, but I (wrongly, as it turned out) thought they would have it written underneath me as I spoke. Whoops.

I did embarrass myself before I came on the air, though…

I’m sitting in the green room in a studio in Chicago before my segment. I’m told someone else is supposed to go on the air before me. That person finally arrives, gets his makeup done, and he’s waiting for his interview. So I decide to make small talk… (consider all of this paraphrased)

Me: So what are you here for?

Him: I’m going to talk about Guantanamo and whether we should keep it open. I just came back from a visit there.

Me: Oh, wow. So what’s your title that you were able to go to Guantanamo?

Me: [In my mind] Wait. I follow politics… He’s not one of my senators, is he?… He’s not Dick Durbin. He’s not Mark Kirk. I’ve never seen him before. Maybe he’s lying. Or maybe he’s a state senator. I’m so confused… How do I not know this? [Aloud] Umm… what state are you from?

Him: North Dakota. I just got elected last year, so I’ve only been in office since January.

Me: Ah… Have you been in politics long?

Him: So why are you here today?

Me: Mhmm… well, shit, I never get to meet senators. Can I get a pic?

And that’s how I came to tell Sen. John Hoeven (R-ND) that I had no clue who the heck he was. 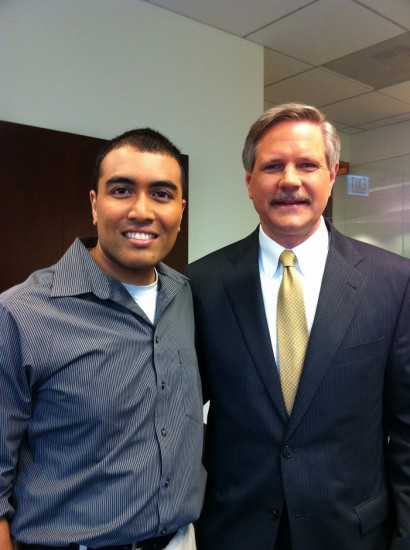 June 18, 2011 Camp Quest for the Whole Family
Browse Our Archives
What Are Your Thoughts?leave a comment