We know all too well how children have been sexually abused in the Catholic Church and how kids have been killed (or nearly killed) because their Christian Science parents refused to take them to a doctor.

That’s just the tip of the iceberg when it comes to how children have been harmed by their religious families and communities.

Janet Heimlich, a former freelance reporter for National Public Radio, has documented this awful epidemic in her new book Breaking Their Will: Shedding Light on Religious Child Maltreatment. 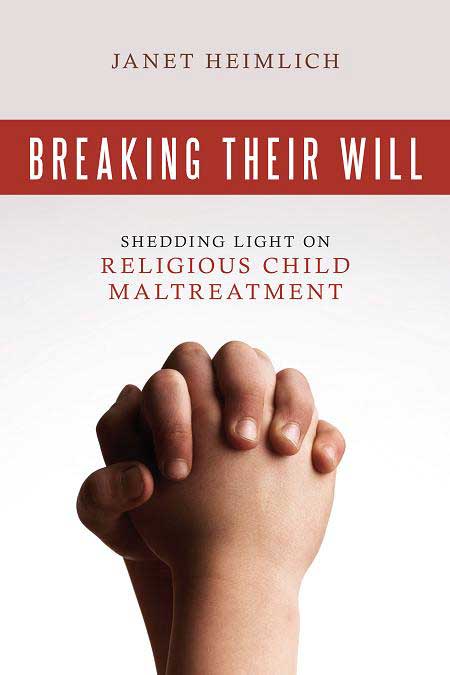 It’s one freaky book, covering topics like physical abuse, emotional abuse, sexual abuse, and even circumcisions. (You can read Valerie Tarico‘s interview with the author here.)

In The God Delusion, Richard Dawkins talks about how indoctrinating children with a faith and labeling them with a religion before they’re old enough to even understand it (“a Catholic child”) should be considered “mental child abuse.” That’s arguable — I was raised in a religious faith and I don’t think my parents “abused” me in any sort of way. But Heimlich covers the spectrum of how religion can really hurt children and her examples are ones theists would have a hard time arguing against.

Two exclusive excerpts are below (reprinted by permission of Prometheus Books), as are instructions for how to enter to win a free copy of the book.

Religious child maltreatment happens for a host of reasons, some of which mirror general child maltreatment. For example, perpetrators may be responding to a desire to dominate and overpower victims. Mental illness can also be a factor. However, this book focuses on cases involving adults who are convinced that their acts are righteous expressions of piety.

Phil Quinn gets across this point in Spare the Rod: “Too many parents are willing to do just about anything to their children if they believe… that it is God’s will… They most often appeal to a higher principle, such as religious duty or love of their child… My adoptive parents told me hundreds of times, during the endless beatings, that they loved me. If that was their way to love, they very nearly loved me to death!”

Can religion be bad for kids? The answer to this question is a resounding yes. So where do we start to try to do something about it? The first step is to acknowledge the fact that religious child maltreatment exists and to learn how to recognize it. Of course, getting even that far means coming to grips with the fact that religion can be a force for both good and bad.

This duality was made especially clear to me after interviewing two women, my friend Mary Ann and Cheryl, the woman who was molested by her minister as a teenager. Like Mary Ann, Cheryl told me that she, too, cries when she hears religious hymns. However, her emotions come from a very different place. Whereas Mary Ann’s reaction is one of overwhelming joy, Cheryl’s tears are of sadness and loss.

Presbyterian minister Keith Wright explains this dichotomy well in Religious Abuse: A Pastor Explores the Many Ways Religion Can Hurt as Well as Heal:

We need to give up the idea that religion is perfect — that the church of which we are a part is perfect or infallible. Religion, like our parents, has the capacity to bless us and to wound us and it inevitably does both at different times… Only when we are aware of the capacity of religion to abuse can we guard against that abuse and take steps to curb it where it exists.

As I made clear in the introduction, this book is not a diatribe against all religion. It does not intend to praise one faith over another or to talk anyone into abandoning his or her beliefs. In the words of British actor and writer Stephen Fry, “It would be impertinent and wrong of me to express any antagonism towards any individual who wishes to find salvation in whatever form they wish to express it.” Americans have the right to practice the religion of their choice, and parents should be allowed to teach their children whatever faith gives their own lives meaning. Many children are raised in loving homes by responsible religious parents, and children certainly suffer abuse and neglect in nonreligious homes and communities.

But there are times when the teaching and practice of religion crosses a line that should not be crossed — a line that the United States Supreme Court drew back in 1944. In Prince v. Massachusetts, the Court states, “The right to practice religion freely does not include the liberty to expose the community or child… to ill health or death.”

With a renewed, realistic, and balanced understanding of faith’s capabilities, we can begin a discussion on how to raise children in a safe and healthy religious environment. Recognizing the connection between faith and child abuse and neglect is the first step to reducing the impact of religious child maltreatment and ensuring that a religious upbringing is a positive experience for all children.

Those excerpts are from Chapter 1. The entire 23-chapter book goes into much more depth.

I think there’s a general consensus among atheists that religion is harmful, period. So instead, I’m asking for your stories.

Was religion a bad thing for you growing up? If you feel comfortable sharing, how?

Or maybe, like me, it wasn’t such a horrible thing. It was just something you grew out of later in life. Was that the case for you?

If you’d like a chance to win a copy of the book, you must live in the U.S. and you must leave the words “Ken Ham” at the end of your comment. If you don’t wish to answer the questions but still want to win the book, that’s fine, too. Just say the magic words. If you’re the winner, I’ll email you next week.

June 17, 2011
Church Vandalism Story on The Young Turks
Next Post