I had mentioned before that I spoke with Pastor John Bluebaugh at Christian Life Center about the vandalism issue. The church had cleaned up the mess and didn’t need the funds, but he was grateful for the gesture.

Today, I spoke with Pastor Jason Myhre at Westside Church. He said that a volunteer or two had helped them with cleanup and they didn’t need the funds either. He added that he appreciated what you all did.

Like I said before, any money raised that wasn’t going to the churches would go to Foundation Beyond Belief and I’ll stick to that. The $2,600+ will be given to them in a few days. (I said this before, too, but in case you missed it, I’m on FBB’s board of directors.) 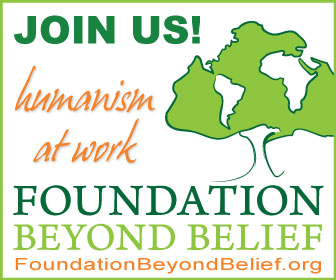 Just to clarify how FBB works (because there’s confusion in the comments), the organization helps non-theists give to a variety of secular charities in the areas of Peace, Education, Child Welfare, Poverty, etc. One of these categories (Challenge the Gap) selects a charity run by an interfaith or theistic group doing entirely secular work. This quarter, that charity is Buddhist Global Relief, which provides “relief to the poor and needy throughout the world regardless of nationality, ethnicity, gender, or religion.”

Our members choose where their money goes, and if they’re not comfortable with money going to a particular category, they can easily say so. No money is given to any charity, including the one run by theists, without the consent of the individual donors themselves. Anyone who says the Foundation is “supporting faith” really doesn’t understand how we operate.

This $2,600+ won’t be going to one of the charities in particular, but it’ll go toward the Foundation’s overhead costs. I would encourage everyone who supports what the Foundation does to donate directly to them or become a member.

June 16, 2011
Do We Really Need This Many Atheist Conferences?
Next Post