A lot of you want to know (and deserve to know) what’s going on with all the money you helped raise for Damon Fowler. If you’re unfamiliar with what I’m talking about, DarkMatter2525 created this helpful summary of Damon’s story:

After asking for your support, you all raised over $31,000 for Damon: 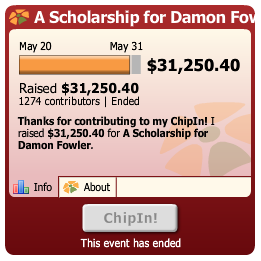 I want to make sure the money goes toward Damon’s education, but I don’t feel comfortable holding on to the money for so long, and I’m also not comfortable just handing over a giant check to someone so young (even though I think some of you would be fine with that).

So I spoke with some friends at the American Humanist Association and we worked something out.

Simply put, the money will be held in a trust fund as part of the Humanist Foundation (of the AHA). When Damon is ready to pay his tuition, he’ll have access to the money.

I sent the AHA the check this morning.

You should all know they’re doing this out of the goodness of their hearts. They heard Damon’s story, were touched by it, and went out of their way to make this arrangement happen. A special thanks goes to AHA’s executive director Roy Speckhardt and legal coordinator Bill Burgess. If you have a chance, please send them a thank-you email.

They’re not asking me to write this, but if you’re not a member of the AHA, I would strongly encourage you to become one. These are good people.