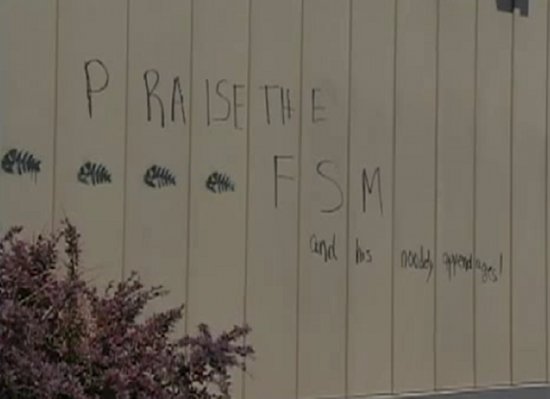 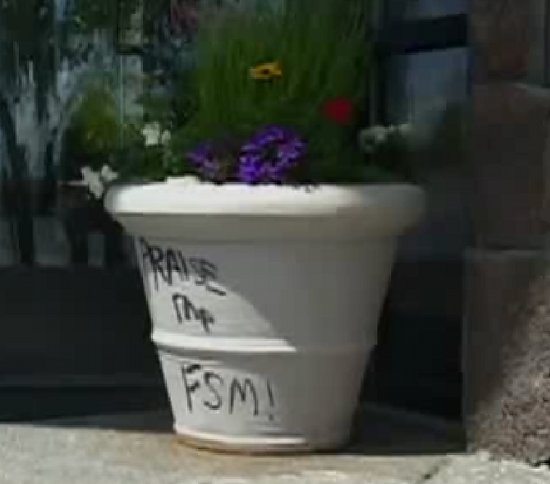 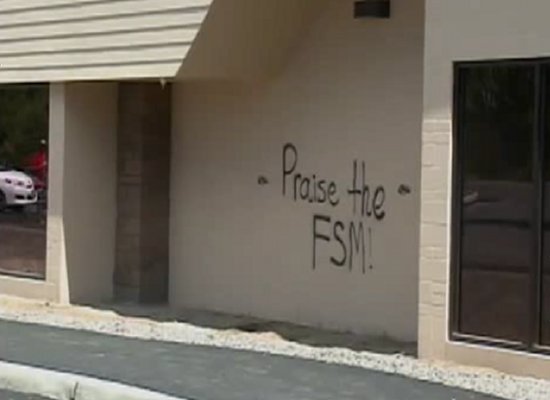 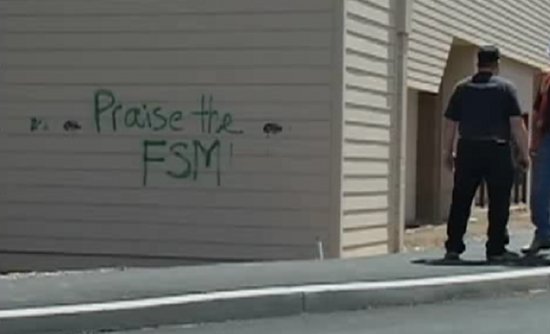 When Pastor John Bluebaugh of Christian Life Center got the news Monday morning, his first thought was, “Not again.”

“Really, what went through my mind was, about six months we were tagged as well,” said Bluebaugh. “It was the same kind of deal — different symbols, different sayings, but the exact same places.”

There are markings left six months ago from vandals who drew Harry Potter-type slogans across the church.

Across town, the Westside Church was tagged with the same graffiti overnight.

More ‘Praise The FSM’ and hateful Bible messages were sprayed across their brand new expansion — some even on the bricks, which now will have to be cut out and replaced.

“Yeah, it’s a bummer what we have to go through and redo all this for a brand new facility,” said Rod Kirk, the director of facilities for Westside Church. “But the bottom line is that God is the one that’s going to get revenge — we aren’t.”

I don’t know who did this and I don’t know if they’re atheists (though, given the message, they may very well be). But this sort of action is unacceptable. I condemn it wholeheartedly, and I’m sure all of you do, too.

So what can we do about it?

Well, after the Damon Fowler incident, I have confidence that we can raise at least some of the money to help the churches clean up this mess.

I know many of you are uncomfortable giving money to a church, but I hope you who can find it in your heart to help them out in this case. They didn’t deserve this vandalism.

Let’s put the Golden Rule to work. When atheist billboards get vandalized, wouldn’t it be a nice gesture if theist groups offered to do the same for us?

I don’t know how much the cleanup will cost, but if more money is raised than they need, I’ll give the rest to Foundation Beyond Belief (an organization that encourages atheists to give to secular charities).

Please chip in. And please encourage others to do the same by embedding the widget below on your own websites.

(***Update***: I’ve ended this Chipin drive. We’ve raised more than enough. Any funds not going to the churches will be given to Foundation Beyond Belief as stated above.)

Let’s make this happen. I called the churches Tuesday night to talk to them about this and couldn’t reach anyone, but I’ll try again in the morning.

(Thanks to Kim for the link)

***Update***: Bobby Henderson, prophet of the Church of the Flying Spaghetti Monster, put out this brief statement:

This is not ok. This is counter to everything we stand for and acts like these only set back our cause. I don’t know who did this, but I will try to find out.

June 14, 2011
A Message for the Tolerant Christians
Next Post