Why Did Amazon.com Get Rid of the Atheism Section? June 14, 2011 Guest Contributor

Why Did Amazon.com Get Rid of the Atheism Section?

A while back, in order to find books about atheism on Amazon, you could click through the following links:

(You could argue that atheism doesn’t belong in a Spirituality section — and you’d be right — but that’s another debate.)

Now, the atheism section is gone.

Not only is “atheism” gone, the only subcategory under Spirituality is “Personal Transformation.”

So instead of Richard Dawkins‘ The God Delusion being (perhaps) #1 in “Atheism,” it’s #63 in “Spirituality.”

Why is this an issue? Simple. It makes it more difficult to find books about atheism in one location on the site.

I never knew why it was so hard to put an “Atheism” section along with the other Religion subcategories before… but to get rid of it altogether? I don’t understand why. Are there not enough books to justify it? I would find that hard to believe… (Hell, there used to be a “Top 100 in Atheism.”)

I asked Amazon about it via their livechat function. Here’s how that went down: 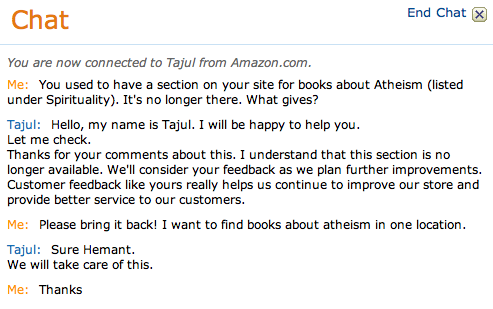 “… This section is no longer available.”

No word yet on when they’re “taking care” of this.

June 14, 2011 Can We Really Change Anyone’s Mind?
Browse Our Archives
What Are Your Thoughts?leave a comment