Christian Network Tells TV Host: Do Not Criticize Christians We Like

I’ll be the first to admit I watch those Christian TV shows that always seem to pop up when nothing else is on — there’s no better form of entertainment. One of my favorites is Jack van Impe because he talks about current events while spouting out every Bible verse he can think of that vaguely connects to that topic.

And he believes Jesus in coming back soon! Today’s headlines prove it! Just look at the horrible things going on, all signs of an impending apocalypse! (With no hint of irony, van Impe recently called out Harold Camping for giving a specific date.)

Also, his wife’s name is Rexella. Bonus points for that. 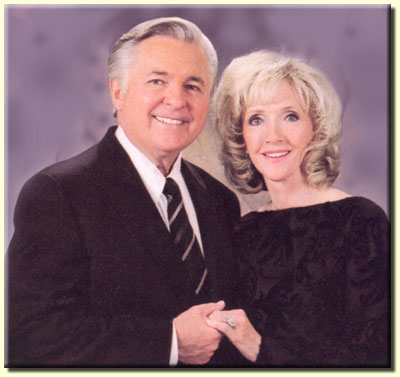 Last week, van Impe was crusading against “churches that have lost their way and four well known leaders that [sic] are promoting Chrislam — a uniting of Christianity with Islam.” You can hear the audio (MP3) and see the video (MP4) of the episode. The relevant part occurs around the 18:00 mark.

Surprisingly, Rick Warren and Robert Schuller were among the leaders promoting what van Impe thinks is false Christianity. It seems both men spoke to Muslim groups about how the two sides could work together for the common good.

Here’s what van Impe said about it on his show:

… Schuller was a speaker for the Common Word conference while Warren spoke at an Islamic event in Washington, DC last year. Wherever Chrislam or its equivalent are promoted, Christians should run for their spiritual lives and I’m really gonna spend time on both of these men for the entire program next week.

That pissed off Trinity Broadcasting Network, which airs Schuller’s show “Hour of Power.”

They aired the episode on Monday, June 6th. After they heard what he said, they chose not to re-air it on Wednesday, June 8th.

According to van Impe, TBN punished him for his comments:

On Wednesday afternoon we received a call from Matt Crouch of TBN informing us that they would not run that program, despite having aired it Monday evening. The reason he gave was that we specifically mentioned Rick Warren and Robert Schuller and that it is TBN’s policy that broadcasters are not allowed to rebuke other ministries. This is a rather hypocritical statement in light of the fact that they have never said anything in the past when we have rebuked others such as Bishop Spong, Bishop Pike, and in the past few months Harold Camping and Rob Bell.

So TBN’s policy is that True ChristiansTM cannot rebuke other True ChristiansTM. What an awful policy. Not that all Christians are automatically BFFs with all other Christians, but if you do something wrong, wouldn’t you want people closest to you to call you out on it?

Not only did TBN not re-air the program, they decided to move van Impe’s program to Friday night, which has a smaller audience, and they told van Impe they wouldn’t air any more of his infomercials (in which donors to his ministry would get a free DVD).

Van Impe has vowed to fight back:

I immediately called our Media Agents and told them that I no longer wanted to air my program on Trinity Broadcasting Network; we will take the tremendous amount of money that we were spending there to obtain new stations that will allow us to continue to reach every square mile of America with the truths of the Bible without this network.

We will be sending a letter out to all of our Partners very soon that will go into more detail as well as sharing how after 23 years of building an audience in the same time spot; they were going to move us to Friday nights where the audience is 25% less — and they stated this was a mandatory move — no exceptions.

I contacted Paul Crouch Jr. seeking a comment for this article and was given this reply, “We choose to lift up the Lord, not chastise others. That’s not our calling. If [van Impe] needs to do that, he can buy time on secular TV outlets.”

Man, I hope he does… his stuff is hilarious. Beats Jay Leno any night of the week.

June 14, 2011 Updated: Who’s Coming to Rick Perry’s Pray-a-Thon?
Browse Our Archives
What Are Your Thoughts?leave a comment