The Black Atheists of Atlanta… and Homophobia June 10, 2011 Guest Contributor

The Black Atheists of Atlanta… and Homophobia

Did anyone else know there’s a public access show in Georgia called “Black Atheists of Atlanta”?

We always talk about the need for atheists to come out of the closet partly because it makes it easier for others to follow. That’s even more true for minority atheists. So I was excited just hearing the title of the show.

But look at the company it keeps on this network… 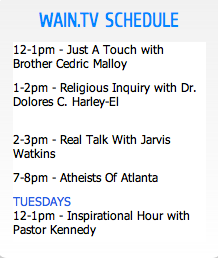 It airs on this channel that touts itself as “Atlanta’s Inspirational Network“… which is kind of weird.

Well, Mike, Rich, and Sam at the Ask An Atheist podcast watched the first few episodes and they were fans.

Then things got weird.

In their latest podcast, the AAA guys played some clips from the May 23rd, 2011 episode of BAA (got that?) and they’re head-scratchingly absurd.

Here’s the BAA episode in question:

At the 5:53 mark, host KD (on the right) says homosexuality is not a traditional African custom. Rather, it’s a “European Greco-Roman social custom.” Black Son agrees and says that homosexuality is selfish. It’s about “me me me.”

At 8:00, Black Son says he’s against homosexuality from a scientific viewpoint because it violates the “Law of Reproduction” (which doesn’t actually exist),

At 11:40, KD says that homosexuality is purely “sex-based,” implying that love doesn’t play any role in the relationship.

Later on, KD says “homosexuals are hiding behind atheism to justify what they do and it’s false…”

And: “For Africans to embrace European social customs is genocide.” (Genocide?!)

At one point, someone calls in to say that there is, in fact, a biological basis for homosexuality.

KD: “Those scientists were white, weren’t they?”

Caller: “Why does that matter?”

KD: “It matters to me because I’m black… if you’re not careful, even science can be racist.”

(I’ll admit it’s true that black people have been victims in some experiments, but that’s the fault of individuals scientists, not science as a process.)

I guess we should appreciate that both guys say they wouldn’t discriminate as a result of this and people have a right to do what they want in private. They say they’re not going to hit gay people over the head with a baseball bat, as if that’s proof they’re not intolerant.

You know, I expect this kind of nonsense to come from the mouths of bigots… but atheists? We’re supposed to be better than that!

I’m disappointed more than I’m angry. But I’m pretty fucking angry right now. The AAA guys even mention that one of the other BAA hosts is a lesbian, which makes the commentary in this episode even more astounding.

In any case, kudos to AAA for rightly calling them out on this. They say they tried to contact BAA (probably via their Facebook page), but they haven’t received a response yet.

What have we learned from all this?

And we should not hesitate to call our own people out on their bullshit.

(Thanks to Jenea for the link)

***Update***: The relevant part of the AAA podcast can be seen in the video below, in case you don’t want to flip through the whole episode:

June 9, 2011
Ask Richard: Atheist Asked to Include Religion When Performing a Wedding Ceremony
Next Post