Millennial Generation is More Supportive of Gay Marriage and Abortion

The Public Religion Research Institute just released a survey (PDF) that asked people about their views on abortion and same-sex marriage (among other things).

The results indicate some good news! 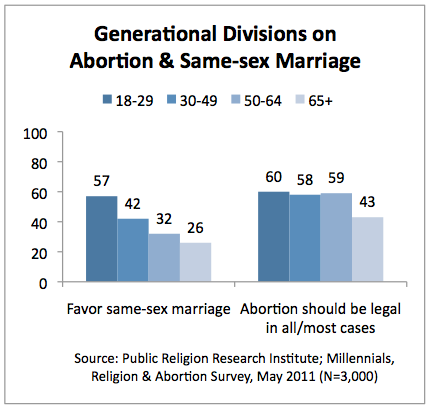 When it comes to same-sex marriage, more than half of all people (57%) ages 18-29 support it. The numbers go down as the demographics get older.

What does that mean? Despite all the obstacles Christians and Mormons want to put in the path to civil rights, the trend is not in their favor. We’ll have gay marriage, eventually.

Valerie Larabee, executive director of the Utah Pride Center, said she too has noticed — in her work with lesbian, gay, bisexual, transgender and heterosexual Utahns — that younger generations tend to be more accepting of same-sex marriages.

“Over time, the myths and stereotypes that have been pervasive in our country and around the world about LGBT people are being de-mystified,” Larabee said. “There’s many more of us who have come out, and we’re seen as neighbors and friends and doctors and lawyers and nurses… and people are accepting us.”

As for abortion, the numbers are pretty similar across the board until the age of 64, after which it drops. But at least more than half of the 18-64 crowd says it ought to be legal in all/most cases.

They also asked everyone about their religious beliefs, which allows us to compare the stances on abortion within each religious subcategory.

Once again, those of us without religion should be proud of ourselves. 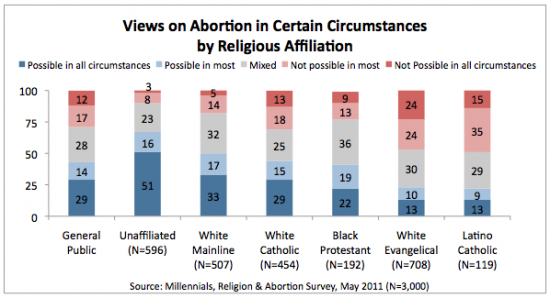 67% of the “unaffiliated” believe abortion should be legal in all/most circumstances. Compare than with only 23% of white evangelicals who feel the same.

But you have to wonder about the 29% of Catholics and 13% of evangelicals who support abortions in all circumstances. I’m glad they feel that way, but how can they still be part of those churches?

68 percent of Catholics surveyed also said they believe it’s possible to disagree with their church’s teachings on abortion and still be a good Catholic.

“The reality,” [family and pro-life director for the Catholic Diocese of Salt Lake City Veola] Burchett said, “is if you are a practicing Catholic and call yourself a committed Catholic, you cannot disagree with the church’s viewpoint on abortion.”

She’s right. You can’t. I don’t understand why the people who think otherwise continue to attend (and support) a church that goes against their own principles. The church would either change its ways or start to slide into obscurity if the people who knew they were wrong left the institution for good.