There Was No Historical Adam June 6, 2011 Guest Contributor

There Was No Historical Adam

Just when I got over the fact that Christians were seriously debating the nature of Hell — a debate that doesn’t even need to take place because there’s no evidence hell exists in the first place — we learn of a new Christian controversy: Did Adam and Eve really exist?

The misleading subtitle at the Christianity Today website puts it this way:

The center of the evolution debate has shifted from asking whether we came from earlier animals to whether we could have come from one man and one woman.

No credible scientists are debating whether one man and one woman began all of human life. They already know the answer is “No.”

But Christians wouldn’t buy that issue of the magazine, so Richard N. Ostling wrote up a nearly 4,000 word article on the false controversy for this cover story: 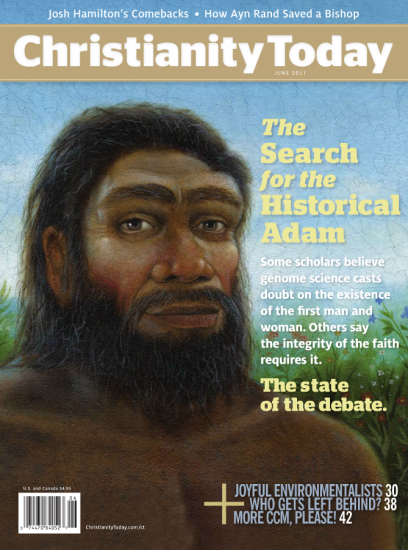 The article is laughable as it highlights everything that’s wrong with mixing faith and science.

For example, as Ostling notes, Bible scholar Dan Harlow wrote an article (PDF) for a Christian journal in which he said Adam and Eve were only literary characters, not actual people. So did theologian John Schneider.

What happened because of that?

As a result of their writings, a personnel panel has been investigating whether they violated the doctrinal standards that [Calvin College’s] sponsoring Christian Reformed Church requires of faculty… Harlow and Schneider could face discipline from the board of trustees, and revived denominational debate about evolution seems inevitable.

Yeah, how dare they try to make sense?! That goes against everything the Bible teaches!

These Christian journals are hilarious, by the way. Even when they say something sensible, they find a way to sound idiotic:

Had humanity begun with only two individuals, without millions of years for development, says an [American Scientific Affiliation] paper, it would have required God’s miraculous intervention to increase the genetic diversity to what is observable today.

You don’t need God in that sentence. As written, that phrase “God’s miraculous intervention” sounds like an explanation that might have some weight to it. It’s not. That’s not even an option. It’s misleading.

Here’s a simpler, more honest rephrasing of that same passage:

Had humanity begun with only two individuals, without millions of years for development, we would not see the amount of genetic diversity that is observable today.

There’s more from the journals…

An ASA paper likewise observes that some Christians who understand Adam and Eve as symbols or allegories suppose that Genesis describes what happened to a particular grouping of humans during the “bottleneck” period, so that “maybe God transformed everyone in this group into the first biblical humans.” The ASA notes another variant in which humanity’s creation and fall happened within different groups over time, as God added moral responsibilities and spiritual revelations.

At least Ostling admits that none of this is a problem for real scientists:

The rethinking on Adam is an outgrowth of mainstream evolutionary thought that has long been the object of evangelical hostility (though the hostility has always been hotter at the grassroots than among professional scientists).

In other words, the only people who think this is a “controversy” are the people who know next to nothing about the subject. The experts already know the answer and it goes against what Evangelical Christian churches teach.

Ostling also mentions the various explanations of how our species came to be. Like the one you’ll see in the Creation Museum: Young Earth Creationism featuring a 6,000-year-old world.

A second competitor, the “old earth” version of creationism, is far more prevalent among evangelical intellectuals. It basically rejects evolution but affirms science’s longstanding and lopsided support for the planet’s vastly ancient age.

Got that? The intellectual evangelicals believe we were created by God but that our Earth is pretty old.

That’s the best scientific thinking Evangelical Christianity has to offer.

Well, when you’re surrounded by complete failures, I guess getting an F+ gives you bragging rights…

By the way, if you needed more reason to dislike the way Francis Collins tries to mix science with his faith, here you go:

(***Edit***: I removed one of the quotations below, which I wrongly attributed to Francis Collins. Thanks to Rachel for pointing that out!)

Instead of the traditional belief in the specially created man and woman of Eden who were biologically different from all other creatures, Collins mused, might Genesis be presenting “a poetic and powerful allegory” about God endowing humanity with a spiritual and moral nature? “Both options are intellectually tenable,” he concluded.

It’s incredible that this would be a controversy at all until you realize it’s only a problem in the Evangelical Christian world. And it’s only a problem there because reality is overlapping with their theology. They’re going to lose this battle eventually. It’s hard to keep the truth covered up and it gets more embarrassing the longer they do it (especially when everyone knows it).

I love how some Christians are debating things that secular science figured out a long fucking time ago. Maybe in the next issue, CT will cover the scientific debate over “Intelligent Falling.”

June 5, 2011
Check Out These Upcoming Conferences, Too!
Next Post