The Graduation Was Like ‘a Revival Meeting’ June 5, 2011 Guest Contributor

I know you’re all wondering what happened at the Medina Valley Independent School District’s graduation in Castroville, Texas yesterday since the 5th U.S. Circuit Court of Appeals said prayers would be allowed there. 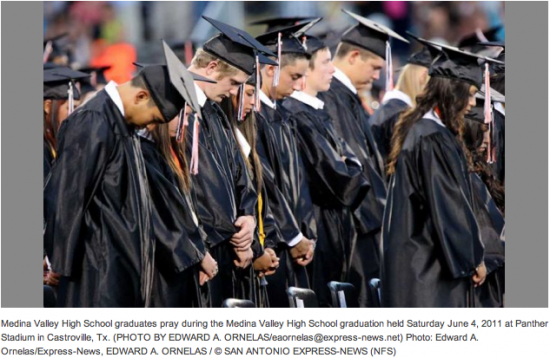 The headline at the Christian Post says it all: “Texas Graduation Takes Advantage of Prayer Ruling, Goes All Out”

The graduation ceremony at Medina Valley High School in Castroville, Texas, on Saturday was filled with prayers and was likened to a revival meeting.

Despite a disclaimer at the beginning of the ceremony by the school district’s superintendent that the students’ and speakers’ views were their own, the gathering at times resembled a revival as much as a small town graduation.

Applause erupted from the school’s packed football stadium with each “amen” — more so than during speakers’ frequent references to school spirit and claims of Medina Valley’s superiority over other schools.

… a student gave what were labeled opening remarks that began, “Those who wish, would you please pray with me?”

[Valedictorian Angela] Hildenbrand also led the audience in prayer, thanking God “for the freedom to be here today.”

As if anyone was trying to take away her freedom?!

However, Hildenbrand and her friends on the Religious Right made it so that Corwyn Schultz, whose parents filed the lawsuit against the district in the first place, wasn’t present for the graduation.

I can understand why he chose not to attend. It’s not like they made an effort to make non-Christians feel welcome.

So this is what happens when prayer is allowed at graduation. The stage becomes a substitute pulpit for the Christians who get up there, and it becomes a lonely couple of hours for all the Jews, Muslims, atheists, Hindus, and students of other faiths who happen to be members of the graduating class but just aren’t praying to the most popular deity of them all.

Well done, administration. You found a way to make one of the most memorable moments in a student’s life into a divisive Christian rally. If that’s your definition of leadership, I pity all those students under your control.

June 5, 2011
There’s Now a Secular Education Option for Students in Morinville!
Next Post

June 5, 2011 Fewer Americans Believe in God Than Before
Browse Our Archives
What Are Your Thoughts?leave a comment