Must Not Tell Anyone About the Free Condoms… June 5, 2011 Guest Contributor

Must Not Tell Anyone About the Free Condoms…

Quick: What’s wrong with this billboard? 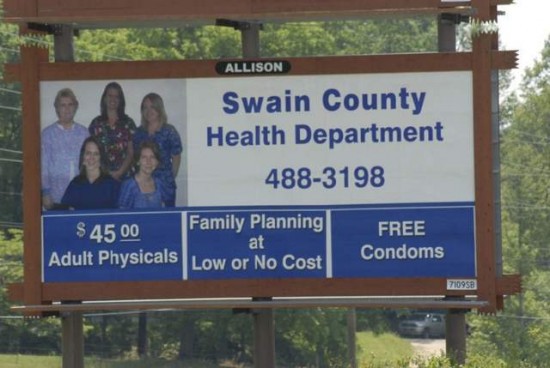 If you guessed “IT PROMOTES PREMARITAL SEX!” then you win!

The billboard, just outside Bryson City, North Carolina, is the focal point of a lot of controversy because of the “FREE Condoms” part of it.

[David] Monteith,… a county commissioner, worries the billboard sends the wrong message to kids. He said it doesn’t square with his beliefs, and it’s not one that should be paid for with government money.

“I come from a generation where you don’t have sex until you get married,” he said. “And as a Christian, that is the way I believe.”

As if anyone gives a flying fuck what he believes…

No one’s forcing anyone to have sex before they’re married. No one’s even making Monteith use a condom.

But his statement isn’t even the worst one:

Libby Wiggins, a county resident who serves on the Health Department board, said she also has heard about the controversy and sees both sides of the issue.

“I am against free condoms because I am against premarital sex,” she said. “That is not what God intended us to do.”

Yes, and I’m against seatbelts in cars because I don’t want 14-year-olds driving… How the hell are those two things connected?!

Believe it or not, some married couples might have a good reason to use condoms, too…

And wait. Let me get this straight. Wiggins serves on the Health Department board and she doesn’t want people who are having sex to protect themselves!?

Who the hell elected these people?

If any county needs free condoms, it’s this one!

Nearly 50 percent of high school students in Swain County said they have had sex, according a Health Department report last year.

About 16 percent of the population lives below the poverty level.

Now, even though the free condoms have been available for 30 years, they’re covering up that part of the sign:

The sign for the Swain County Health Department, advertising low-cost physicals, family planning and “FREE condoms” has been altered, now with a blank spot covering the portion of the board that mentioned contraceptives.

The decision was made by the five-member county Board of Commissioners, all of whom were in favor of removing the portion advertising free condoms, County Manager Kevin King said.

If you want to reach any of these five commissioners — Phil Carson (Chairman), Robert White (Vice-Chair), Donnie Dixon, David Monteith, and Steve Moon — their phone numbers and email addresses can be found here.

Is anyone surprised that it was five men who decided that local women don’t need to be aware of access to free protection against unplanned pregnancies? They’re all embarrassments to their community. Where are the informed teenagers and local men and women who can speak out against this insanity?

Go to their twice-a-month board meetings and raise some hell.

And hand those men some condoms while you’re at it.