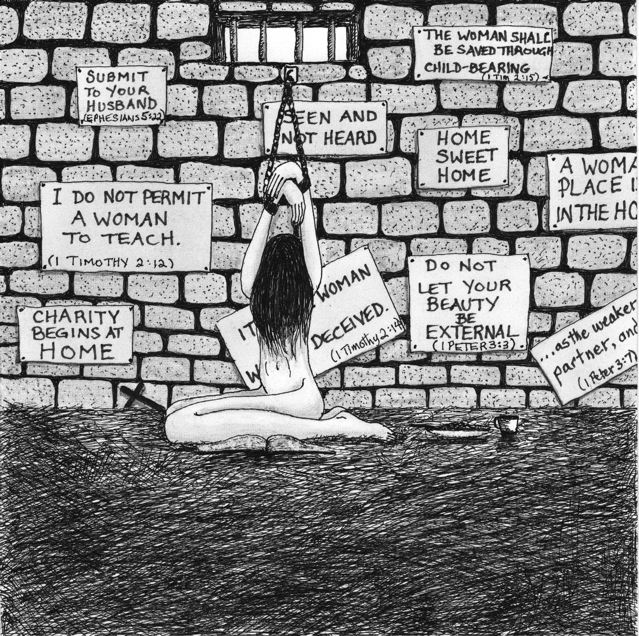 Even though we might agree with the idea of a mutual submission, these selected words have been turned into words of servitude and slavery. They are being used to confine her, control her and keep her. Even the cross, which might be used as a metaphor of volitional suffering, has been turned into a tool requiring it. The bible laid before her which contains powerful words of liberation has become a text of bondage. There is food and drink as promised, but they are obviously kept beyond her reach. The only way she can enjoy them is if they are fed to her. Even her nakedness, her vulnerability, which should be beautiful and cherished, is used as a weapon against her. She must keep silence and not question her captors because it always results in chastisement.

Obviously, not all Christian men act like this. But the institution as a whole has no intention of treating women as equals. They’ll turn away female preachers. At times, the women don’t even speak, letting the man do it on their behalf. In fact, the ideal Christian woman — the Proverbs 31 woman — is supposed to be supportive of her husband’s whims (not the other way around), a homemaker, and a good cook. She “seeks her husband’s approval before making purchases.” She’s an embarrassment to feminists. (Though, as one Christian friend put it, you could say she “runs her own business.”)

You never hear about holy texts saying a woman should be assertive or have opinions of her own. (I’ve heard a number of Christian women say they had a hard time dating men in their church because they were so opinionated and self-confident.)

Of course, it’s not like other faiths are crying out for independent women, either. They want women to be submissive to their husbands, silent assenters to whatever the men want.

You have to wonder why so many women remain in the Christian church when it holds them down as much as it does.

***Edit***: Commenters are right to point out that it’s tough to “break free” when both of your hands are in shackles like the woman in the picture. However, while society is dominated by males in general, I do think religion makes things even worse for women.

It’s tough for anyone to leave his/her faith because it involves leaving a social network and support system — and women have it tougher than men. But there are many women who left their faith and came out stronger because of it. I hope we (as atheists) can help out those who don’t hold superstitious beliefs but still want the community support.

May 31, 2011 How to Not Attract the Babes
Browse Our Archives
What Are Your Thoughts?leave a comment