Bart Centre is the man getting all sorts of press — again — for his Eternal Earth-Bound Pets service, where (for a fee) he promises to take care of your pets after the Rapture. Brilliant.

His latest book (under the alias “Dromedary Hump”) is called The Atheist Camel Rants Again! 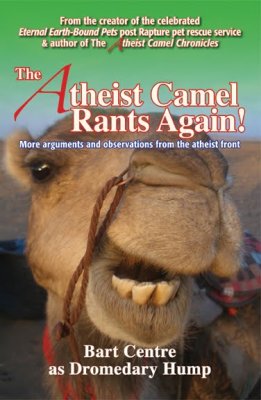 Bart’s giving away a free copy of his book, but first, here’s an excerpt from a chapter entitled “The Holy Foreskin Obsession”:

It seems that Jesus’ foreskin holds a revered place in Christian lore. Who’d have guessed that a religion whose followers are so… uh… “flaccid” when it comes to their icon’s Judaic roots and practices would have such a fixation? But for over fourteen hundred years there has been a rather unhealthy affinity for Jesus’ penis tip. Call it “holy penis envy.”

On January first each year, Lutherans, Anglicans, and Eastern Orthodox Catholics observe the holiday called “Circumcision of Christ.” This holy day marks Jesus’ submission to Judaic law and tradition. In accordance with Jewish law, Jesus was circumcised on the eighth day after his birth. The Catholic Church decided back in 1969 to quit observing the fourteen-century-old holy day of the “Feast of Circumcision” (appetizing), and instead decided to rename it “Solemnity of Mary, Mother of God” day. Small wonder, given the former feast’s implied menu.

If that weren’t bizarre enough, there have been at least twelve official and unofficial Jesus foreskin relics revered and passed along among churches, popes, and devout nobles throughout Europe from the ninth through the sixteenth century. These were the Holy Prepuces. They kept them in special jeweled boxes, “whipping them out” only for very special occasions and celebrations… each church and owner attesting that only their prepuce was the one true foreskin of their Lord and Savior. Think I’m making this up? Here’s a “tip” for you: Google “Holy Prepuce.”

In fact, medieval paintings depicting the circumcision of Jesus were a hot commodity in the good old days.

Well, things got so out of hand, what with all of this unseemly Jesus penis talk, that in 1900 the Catholic Church threatened excommunication for any “putz” daring to write or talk about Jesus’ holy member. The penalty became “stiffer” in 1954, when violation of the rule earned the highest level of excommunication, which included being shunned.

Unfortunately, during the Reformation and French Revolution, almost all of these penis pieces were destroyed or lost. Only one remained into the twentieth century, The Holy Prepuce of Calcata, which was “exposed,” put on display, and taken for a walk through the streets of that Italian city annually as recently as 1983. The yearly practice would probably still be going on today had they not been “shafted” by some thief who stole it, jeweled box and all. What a “dick”!

So, why this Christian “hard-on” for Jesus’ foreskin? Hey, who knows what makes Christian cultists tick. Headhunters have their shrunken heads, voodoo practitioners have their dried bats and such, and Christians favor their man-god’s manhood. I guess one could say all other religions’ relics just don’t “measure up.”

As a non-believer, I tried to equate this to some peculiar secular practice. But I never heard of anyone claiming to own Woody Allen’s, Sigmund Freud’s, or Isaac Asimov’s excess penis part. For some reason, freethinkers just aren’t “hung” up on the attraction. Maybe it’s because we aren’t “schmucks.”

I think all I need to do to get a conversation started here is say the word “Circumcision.” (Discuss!)

If you live in the U.S. and want a chance to win a signed copy of Bart’s book, just leave a comment in this thread and put the word “pumpkin” at the end of it! I’ll email you next week if you’re the winner.