Why Do Wealthier People Give Less to Religious Organizations? May 30, 2011 Guest Contributor

Why Do Wealthier People Give Less to Religious Organizations?

The Congressional Budget Office just released a report about the “Options for Changing the Tax Treatment of Charitable Giving” (PDF). (Bored already? Give it a second…)

Here’s one of the takeaways from the report, as reported at Christianity Today:

… proposed changes to the tax code could reduce charitable contributions. However, the CBO does not expect religious organizations to be affected because religious donors are less sensitive to the tax benefits of contributions. Instead, it is the charities favored by the rich — the arts, education, and healthcare — that are more likely to see lowered donations.

This chart from the report offers a little more detail: 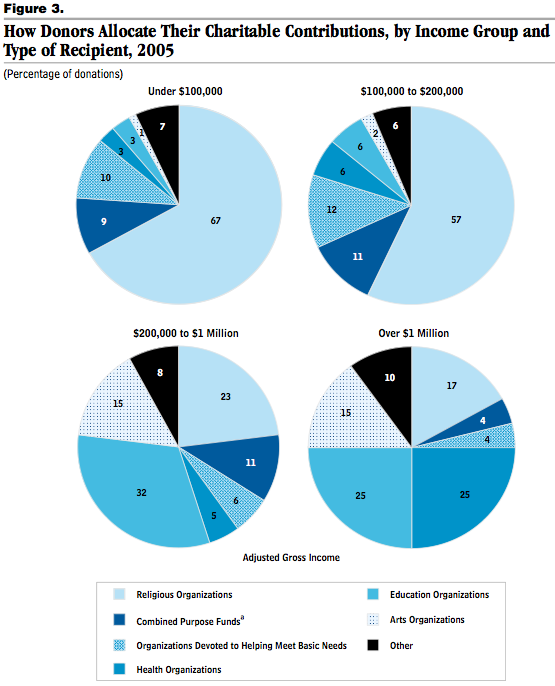 Here’s what you need to take away from that:

It turns out that people making under $100,000 a year give 67% of their donations to religious organizations. Meanwhile, for people making over $1,000,000 a year, that number drops to 17%. There’s a steady drop in between those amounts, too.

(It’s worth pointing out that wealthier people may still give more money to religious organizations overall, but their percentage of donations toward religious groups goes down the more they make.)

I’ll throw it to all of you: Why is this the case?

Why do wealthier people give a smaller segment of their donations to religious groups? Do they simply have more options? Do they care less about religion? Do they have other priorities? Something else entirely?

May 30, 2011
Ask Richard: Indonesian Atheist Wants to Be Open About Her Views
Next Post

May 30, 2011 Non Prophets Radio Interviews Student Activists
Browse Our Archives
What Are Your Thoughts?leave a comment