How I Got Kicked Out of the AutismOne Con: Part 2 May 30, 2011 Guest Contributor

How I Got Kicked Out of the AutismOne Con: Part 2

This is a guest post by Jamie Bernstein. Jamie is a graduate student in public policy at the University of Chicago as well as the Vice-President of the Women Thinking Free Foundation. She has previously written about anti-vaxers here and here.

You can (and should) read Part One of Jamie’s story at Skepchick before reading Part Two below.

At this point Ken and I needed a break. As we returned from our trip to Starbucks, we decided to go walk around the exhibition tables again. Plus, I wanted to grab some pictures. Although photographs were not allowed in the lecture areas, there was no indication that they weren’t permitted in the exhibition areas. In fact, I had seen individuals without press passes taking pictures in these sections all day. I also wanted to attend the Blaxil-Olmsted talk on their book Age of Autism since they would be talking about the vaccine-autism connection.

As we walked back into the convention, Ken pointed out a few women who were giving him shocked looks — he thought he was recognized. We stood around for awhile, but no one approached us, so I suggested we just go about with our original plan and hope no one questioned anything. After all, we were just walking around and looking at booths. We weren’t disrupting anything or doing anything against the rules, not to mention our registration had already been approved.

I stopped at a booth that was selling hyperbaric chambers for autistic children and got out my camera to take a picture. Immediately, the director of AutismOne, Teri Arranga, was at my side telling me that pictures were absolutely not allowed. I apologized and told her I hadn’t realized that since it wasn’t written anywhere and I had seen people taking pictures all day. She said it was on signs all over the conference and offered to show me. I agreed, so she got her friend to go grab one of the signs.

The sign they showed me said that audio and video recordings were not allowed, but said nothing about still photography. When I pointed this out, Teri snapped that it was on a different sign and sent her friend to go grab that one. Her rudeness was starting to make me nervous, so I continued to apologize for taking the photo, said I believed her about the sign, promised to delete the photo and asked if I could leave. She ignored all that and instead asked me if I knew Ken Reibel. I said that I did since I wanted to cooperate and be honest.

That’s when hotel security showed up. With no explanation, Teri left Ken and me with three confused officers. I kept asking if I was in trouble, but the guards just responded that they weren’t sure what it was about but had been asked to watch us.

A police officer walked up to Ken and me and said, “Are you aware that you have been asked to leave?” We both replied that no one had previously mentioned kicking us out, but that we would cooperate and go if they wanted us to. From our point of view, it seemed like Teri must have told the police that she had asked us to leave and we refused. This never happened, though.

At this point, Teri said she wanted my camera film… which is kind of a strange thing to ask since this is 2011 and most cameras don’t use film anymore. I told her I didn’t have film, but would be happy to delete the pictures I took. The police officer said that would be fine, but Teri would have none of it. With a shaking voice, she snapped “No, I demand the film!” I said (again) I didn’t have any film, it being a digital camera and all, but took my camera out and erased the two pictures that were on there. She seemed unhappy with this result, but was unable to overturn the police decision.

At this point, Teri and a police officer took Ken aside and I was questioned by the remaining Lombard police officers. They took down all my personal information and kept asking me paranoid questions like “Are you a journalist?” “Do you work for a magazine?” and “Who sent you here?” I answered all questions truthfully, though they weren’t happy with the answers. They seemed convinced I was some big-shot reporter for a magazine and kept harping on that point as I continued to deny such a thing. I kept asking the police if I was in trouble or if I’d done something wrong. They told me I wasn’t in trouble but that they just had to take down my information.

When Teri got back with Ken and the other police officer, we were told that we were being given a trespassing warning and would be arrested if we came back. I asked Teri if we had broken any rules. She got out her conference program and with a voice shaking in anger read us this paragraph:

“We reserve the right not to register any individual based on our own judgment. We further reserve the right to ask any participant to leave the conference if that person’s conduct substantially interferes with the participation of others. No audio or video recording is permitted without advance permission from AutismOne staff.”

To be clear, both Ken and I had our registration approved by AutismOne prior to the event. We didn’t do anything to disrupt the conference or interfere with anyone else’s participation, nor did we use any audio or video equipment. AutismOne had absolutely no legitimate reason for removing us from the conference. When this was pointed out to the police officers, we were told that since it’s a private event, they don’t need a reason to remove us.

At this point, Teri refunded our registration money in cash from her own wallet. Then, all three hotel security guards and the four armed-Lombard police officers marched us out of the conference. When Ken Reibel did some research on the Lombard Police afterwards, he determined that they only have 51 officers and 8 on duty on weekends. That meant that Lombard used 8% of their total workforce and 50% of the officers on duty in order to kick the two of us out of the AutismOne Conference… even though we were being completely cooperative and had not broken any rules. 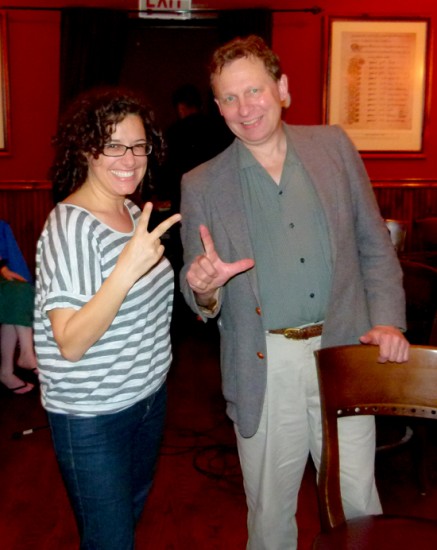 As you can tell from that picture, Ken and I (posing with our “V for vaccine” gesture) are big, strong and evil! Clearly a need for excessive police force…

As we left, we passed right by David Geier, who watched us leave with an amused look on his face. For those unaware, David and his father Mark Geier have been in some serious trouble in both Maryland and Washington State for their unconventional autism therapies including chemical castration of children. AutismOne decided to kick both Ken and me out, while they gave the Geiers an entire hour on Friday to recruit more parents for their dangerous and unethical therapy.

So, great job AutismOne! You chose to use three security guards and four armed officers to remove two people who were being entirely cooperative. Not to mention that there was no provocation at all and you never gave any reason for removing us. Besides, it’s not like the event was so private. In fact, the entire conference was being live streamed on the Internet, so Ken and I could probably have obtained more information about the conference by staying home and watching on our computers.

The whole controversy seemed to occur due to paranoia on the part of AutismOne, who believed Ken and I were part of some conspiracy to disrupt the conference. “It’s a private conference” is no excuse to treat two rule-abiding people like criminals.

I’d like to end with a quote from Orac’s response to the incident on his Respectful Insolence blog:

You can also read Ken’s versions of the events here.

May 30, 2011 Ask Richard: Indonesian Atheist Wants to Be Open About Her Views
Browse Our Archives
What Are Your Thoughts?leave a comment