Catholic Adoption Agency Will Shut Down Instead of Letting Gay Couples Adopt May 29, 2011 Guest Contributor

Still, Catholic Charities of Rockford is so afraid that it’ll now have to place foster children in the homes of gay couples (PDF), that it’s going to shut down it’s state-funded adoption services altogether:

In Rockford, the decision could displace about 350 foster children served by Catholic Charities and put 58 employees out of work.

Without a specific provision protecting religious agencies, church officials said, the agency can’t risk losing state contracts or facing lawsuits if it turns away gay couples or others in civil unions. State funds make up about half of Catholic Charities of Rockford’s $7.5 million operating budget.

“While we understand leaving this work will be very painful for our client families, employees, volunteers, donors and prayerful supporters, we can no longer contract with the state of Illinois whose laws would force us to participate in activity offensive to the moral teachings of the church — teachings which compel us to do this work in the first place,” said Frank Vonch, director of social services for the Diocese of Rockford, which includes Kane and McHenry counties.

Yeah, that makes sense. The same people who stood idly by as priests raped little boys for decades are claiming the moral high ground… Keep in mind that the “offensive” activity they’re lashing out against is letting loving gay couples adopt kids who need parents. They’re so prejudiced against gay people that they would rather let the children suffer than to even consider that possibility. Sickening, right?

That’s religious logic for you: When a child needs a loving mother or father more than anything, and there’s a possibility of giving them two mothers or two fathers, the Church thinks they’re better off with nobody.

Benjamin Wolf, an attorney with the American Civil Liberties Union of Illinois who represents juvenile state wards as part of a court-monitored consent decree with DCFS, said the decision was troubling, especially in Rockford where there is a high turnover of child welfare workers and racial and economic tensions.

“Rockford would not be the place I would’ve chosen to start these transitions,” Wolf said. “I am very sorry that they would give a greater priority to their commitment to continue discriminating than the health and welfare of Illinois children.”

It’s not just Catholics. The evangelical Christian group Focus on the Family, which has made getting children adopted a priority of theirs, also doesn’t want to see a child adopted by a gay couple. 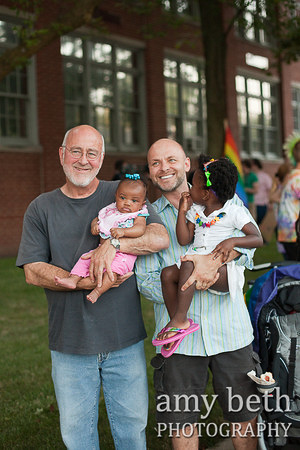 You know, if Catholic Charities of Rockford allowed children to be placed in the homes of single parents, divorced-but-remarried parents, or non-Catholic parents, it would just make their reasoning even more flawed…

… oh wait, lookie what we have here:

“We believe that children are best served by being in the home of a married couple or a single individual,” [Catholic Conference of Illinois executive director Robert Gilligan] explained. “That’s not a radical notion.”

Fuckin’ Catholics. How do they work…?

(Side note: Why is Illinois even funding a Catholic adoption group? There are secular adoption agencies who could use the funding — and they don’t discriminate.)

May 29, 2011 PZ Raises the White Flag!
Browse Our Archives
What Are Your Thoughts?leave a comment