The Secular Student Alliance surpassed 250 campus groups this past year: 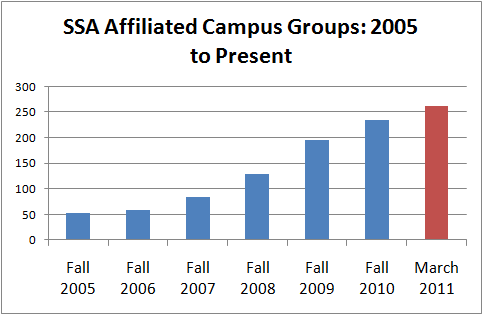 The high school groups are set to explode even more next year.

We owe them a debt of gratitude, no doubt, but according to American Humanist Association president Dave Niose, we can thank Religious Right litigator for the American Center for Law and Justice (ACLJ) Jay Sekulow:

In the case of Westside Community Board of Education vs. Mergens (1990) Sekulow successfully argued, on Free Speech grounds, that public schools generally cannot prohibit formation of Christian clubs if other kinds of clubs are allowed. Since then, Bible clubs, prayer clubs, and other voluntary Christian-oriented extracurricular activities have become commonplace in public schools across the country.

What Sekulow and others on the Christian Right may not have considered, however, is that the Mergens decision opened the doors not just for Christian groups in public schools, but for other groups as well. In fact, it was a game-changer. If Free Speech standards dictate that Christian clubs cannot be banned, then neither can Jewish, Hindu, or Muslim clubs.

… thanks to Jay Sekulow, organized atheist groups are now rapidly sprouting in high schools all over the country, protected by First Amendment rights and recognized by the school administration.

It’s easy to forget that the Religious Right fought our battles before we were starting groups everywhere, but I guess we can thank them for this unintended-but-wonderful consequence 🙂

In fact, we should celebrate it with a nationwide Sekulow Student Day! Who’s in?

(Awful joke in preceding sentence was stolen from here.)

May 26, 2011
An Interview with Damon Fowler and his Brother Jerrett
Next Post

May 26, 2011 Know Any Great Young Activists?
Browse Our Archives
What Are Your Thoughts?leave a comment