The Month of Maybe

This must be Harold Camping‘s calendar for any future Rapture-related predictions: 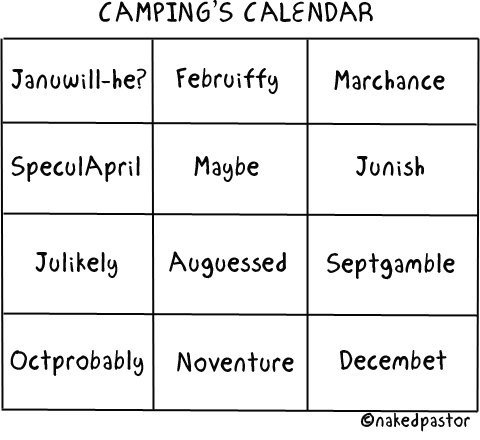 He won’t admit he was wrong, though. That’d be downright unChristian of him. David Hayward understands this:

… the mental and spiritual gymnastics [Christians] go through to desperately try to make it make sense is breathtaking.

Why? Because if they admit they were wrong about hearing from God, then they’ve opened up a huge theological and spiritual problem.

And they just can’t go there.

Eventually, it’ll hit them that god was never speaking to them in the first place. Maybe if Christians were willing to point that out more often, it wouldn’t happen as much. But since they treat those delusions far too delicately — they wouldn’t want to hurt someone’s feelings, especially when god is involved — predictions like Camping’s will continue.

May 25, 2011
The Different Covers of Richard Dawkins’ Book
Next Post

May 25, 2011 2011 Harvard Humanist of the Year: Seth MacFarlane
Browse Our Archives
What Are Your Thoughts?leave a comment