There’s an atheist billboard in California right now that’ll be up through Memorial Day thanks to the Orange County Coalition of Reason:

Somehow, that optimistic, welcoming message is offensive to some Christians. And they’re fighting back! 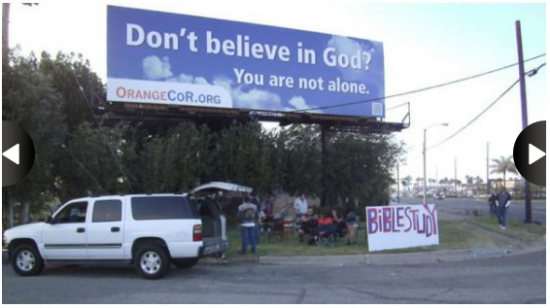 A group of Christians who have been gathering to conduct Bible studies under a “Godless billboard” erected by a national atheist organization say they will do so until the sign comes down.

Henry Longbrake, a Garden Grove resident who has been coordinating these sessions each evening since May 11, says he and other Christians are exercising their freedom of speech just as the atheists did by putting up the billboard.

“There is no question that this billboard is unhealthy for our community,” he said. “They’re spreading the wrong message. We’re doing this Bible study right under the sign because we want to show our support and love for our God.”

The group will meet under the sign every night from 7 to 8 p.m. for Bible study until the billboard comes down, Longbrake said.

“I guess you could call it a silent protest of the billboard,” he said.

Wow! They showed those atheists! How dare they try to stop Christians from praying?!

The atheists never did that.

(***Edit***: As the comments have pointed out, no one was trying to stop the Christians from praying. That was sloppy writing on my part. I still say they’re protesting unneccesarily since this billboard isn’t about them — it’s a message to atheists who are already out there. The billboard isn’t going after the Christians personally. So I still think the “Martyr” comment below holds true.)

This is nothing more than a symptom of Christian Martyr Complex — for whatever reason, they’re pretending to be victims every time atheists assert themselves.

But Fred Edwords of the United Coalition of Reason has a perfect response for them:

“It’s fine with us,” he said. “The answer to freedom of speech is more speech.”

I’ve never seen someone deflate a protest that so quickly… that’s gotta hurt.

May 25, 2011
Oregon Senate Votes to Get Rid of ‘Faith-Healing’ Exemption in Law
Next Post

May 25, 2011 The Different Covers of Richard Dawkins’ Book
Browse Our Archives
What Are Your Thoughts?leave a comment