2011 Harvard Humanist of the Year: Seth MacFarlane May 25, 2011 Guest Contributor

Gotta hand it to everyone at the Harvard Humanist Chaplaincy — they know how to use that name to their advantage.

They got Family Guy and American Dad! creator Seth MacFarlane to accept their Humanist of the Year award on June 14th! June 4th. 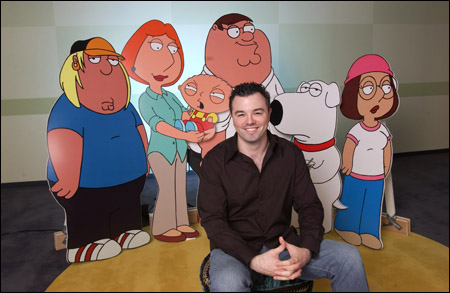 We are very excited MacFarlane was able to work this exclusive event, an award ceremony and fundraiser for our organization, into his schedule.

While it is rare for someone his age to receive this honor, his extensive body of work, his active, passionate commitment to Humanist values, and his fearless support of equal marriage rights and other social justice issues compel us to recognize his contributions now.

Not to mention his acceptance speech is bound to be hilarious…

Tickets go on sale at the Harvard Box Office sometime next week. The Facebook event page is here.

Past recipients of the Harvard Humanist of the Year award include non-theistic Congressperson Pete Stark (D-CA), Steven Pinker, and E.O. Wilson.

A couple years ago, MacFarlane appeared on Real Time with Bill Maher and discussed the atheist movement (for which Maher seems to take far more credit than he deserves…):

It’s a great selection on the Chaplaincy’s part — MacFarlane’s bright, popular with the college crowd, and a person who can go a long way to bringing our movement to the mainstream.

Now, who’s gonna fly me to Cambridge so I can watch him accept the award…?

P.S. One downside to this: It’s another white guy. Next year, I want to see Rachel Maddow accepting this award. (She’s a Humanist, right?)

May 25, 2011 The Damon Scholarship
Browse Our Archives
What Are Your Thoughts?leave a comment