What Happened at Damon Fowler’s Graduation? May 21, 2011 Guest Contributor

What Happened at Damon Fowler’s Graduation?

If you need background on the story, go here.

Damon Fowler had his graduation last night. The program listed a “Moment of Silence” as part of the festivities, but this is what actually happened:

You can tell from the audience reaction that this has very little to do with a Christian sincere to “thank god” during graduation. The response is much more of a “Fuck you, atheists.”

Graduating senior Laci Mattice opened her statement with, “I have something to say. I respect the beliefs of other people, but…”

We can stop right there. The word “but” tells you everything you need to know. I’ll paraphrase the rest of it: “I respect other people’s beliefs, but screw you if you’re not Christian. It’s prayin’ time!”

So they said a prayer for Jesus.

Followed by a Moment of Silence (code words for “more prayer”).

Followed by the Pledge of Allegiance (which includes the words “Under God”).

And that’s supposed to be inclusive for all students?

If you’re a Christian wondering what the problem is with all this, just imagine if Laci had said a prayer to Allah instead:

A local newspaper, The Bastrop Enterprise, played down all of this.

Just take a look at the headline and subtitle: 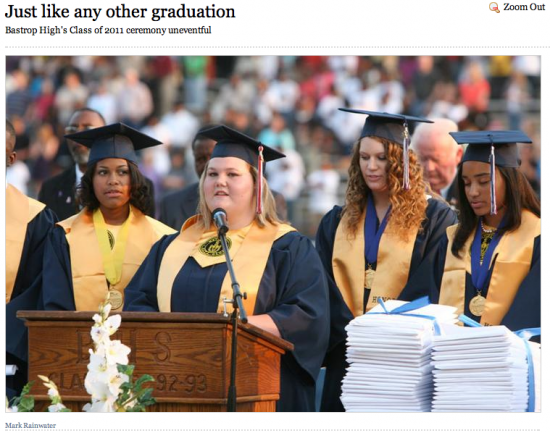 (Side note: I’ve seen some people photoshopping the above image of Laci. Don’t do that. That’s just mean. She’s not the real problem here. The focus should remain on the administrators who directly and indirectly urged the prayers to happen and on Damon for alerting all of us to what was going on there. Ok, rant over.)

The paper goes on to say:

Principal Stacey Pullen said earlier in the day that additional security officers were requested because of the outcry by atheists from across the country who sided with the student who filed the protest.

Right. Because atheists are the violent ones. Damon, the student who brought this to the public’s attention, is getting death threats, but it’s all those Christians hooting and hollering in the background who need the protection.

The ACLU of Louisiana, probably giddy with excitement at all the video evidence of what happened at the rehearsal ceremony and the actual graduation, sent a letter to the school on Friday (PDF). It’s clear from the video that the principal ignored it entirely:

School officials have a duty to uphold the Constitution and the law for all members of the community. Religious freedom in this country has flourished because the First Amendment prohibits government endorsement of religion. We recognize that the Bastrop High School graduation scheduled for this evening has removed the prayer from the program, in compliance with the law and the rights of the students and their families. We trust that the graduation will proceed as the law requires, that there will be no school promotion or sponsorship of prayer of any kind, and that any moment of silence proceeds as a silent time of reflection by those in attendance.

For those interested, here’s are a few other tidbits from last night (as mentioned on the Support Damon Facebook page):

If you’d like to contribute to a scholarship fund for Damon — a way to thank him for standing up for church/state separation — you can do it via the ChipIn below:

Or you can make a donation on behalf of Damon to the ACLU of Louisiana and FFRF.