The Boot Protest Guy is Back… May 19, 2011 Guest Contributor

The Boot Protest Guy is Back…

About a year ago, notorious campus preacher Brother Jed was at the University of Oregon spewing his blather when a clever student found a way to shut him up.

As Jed spoke, a student named Tony stood near him, preaching the Gospel of The Boot:

Tony was quite hysterical as a southern Baptist minister, and exceptionally clever, responding to questions on the fly. Someone would shout a question like, “What about Uggs?” and Tony would rant about the deception of the false boots that were unable to protect one’s feet from the wetness, and that the truth path was only found in the footwear that was capable of keeping your feet dry. 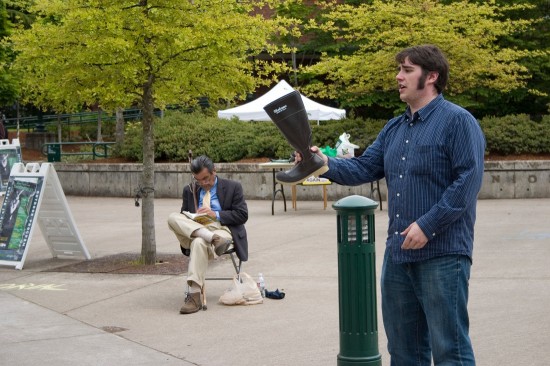 Why mention this again (besides the fact that it’s hilarious)?

Brother Jed was back in Oregon this week.

And Tony was there waiting for him 🙂

Here’s how Jed explained what went down on Facebook (emphasis mine):

When I reintroduced Sister Pat as celebrating her 82nd birthday she was given an ovation. However, thirty minutes into her talk. The “boot preacher” interrupted Sister Pat. He did his antics against me last year. He uses religious terminology and holds a boot up and exhorts people to worship the boot. He preaches nonsensical blather which is actually blasphemous mockery of God. He delighted the students though. Sister Pat stood aside and let him have the floor, which is usually the wisest thing to do since these guys usually run of gas eventually. In his case about 4 PM it started raining again and everyone scattered. Sister Pat said, “That was the devil interrupting, I was making many good gospel points.”

Sister Pat wasn’t the only person who “stood aside,” though. Based on the pictures below, Jed decided to take a seat, too. (He’s on the far right in this first image.) 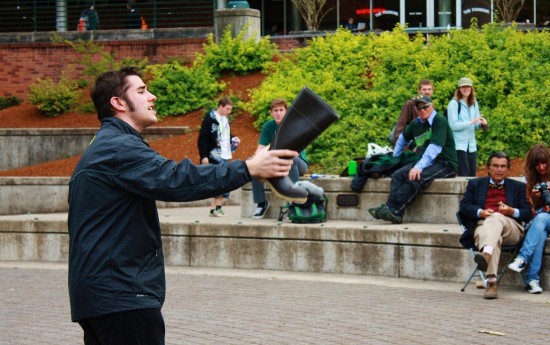 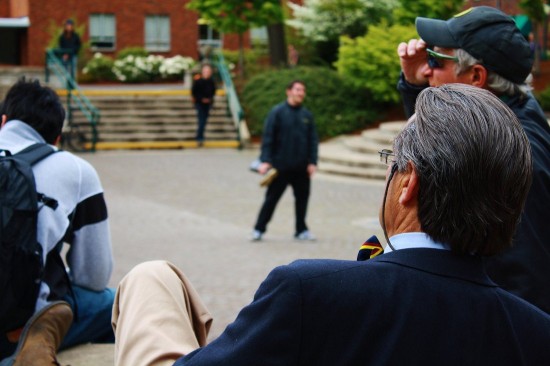 I love how a clever student (with a lot of supporters) can bring down a crazy preacher who does this sort of shit for a living.

May 19, 2011 Team Diversity Still Has Time to Beat PZ!
Browse Our Archives
What Are Your Thoughts?leave a comment