Teacher Suspended Because He Made Students Think May 17, 2011 Guest Contributor

Teacher Suspended Because He Made Students Think

Back in high school, my English teacher had us read excerpts from Ecclesiastes. Not because it was religious in nature, but because it was a wonderful piece to analyze and discuss.

With younger students, it’s harder to get them to have serious discussions about literature, so some teachers try to analyze different things. Like song lyrics.

John Orme, an English and History teacher at Gordon Price school in Ontario, Canada, had his kids read and discuss the lyrics to a song from 1986 called “Dear God” by the British band XTC.

If I taught English, I don’t know that I would have chosen the same piece, but if the point is to analyze lyrics and have a conversation about them, does it really matter?

Despite the fact that the lyrics talk about questioning god’s existence, the teacher wasn’t trying to preach atheism. He wanted to have a conversation about why his students believed what they did.

And one parent wants none of that:

[Amanda Griffiths] said [her daughter] Kelsey’s class was asked to explain what the author was trying to convey through the lyrics and what they thought about his message.

According to Griffiths, her daughter wrote that the author was saying he didn’t believe that God exists and that the stories in the Bible are untrue. As for what she thought of the author’s message, the 12-year-old wrote: “I hate this because I believe in God and always will.”

Kelsey Griffiths said Orme later asked her to stretch out her answer and give a better explanation as to why she holds that belief.

“But there’s no real reason why you believe in God,” she said. “It’s just a faith thing. I couldn’t think of anything about why. I just do.”

The girl said she was so upset she stuffed the assignment into her pocket and brought it home to show her mom, instead of handing it in.

The daughter is clearly distraught. Look at how horrified she and her mom look! 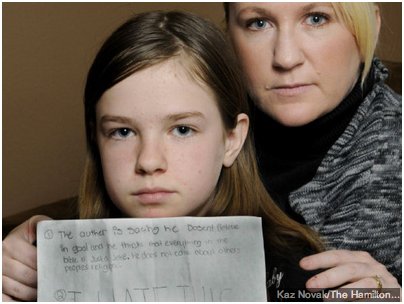 Griffiths was upset because the teacher asked her daughter to explain why she held her beliefs…? That’s a great question to ask students! It’s not like Orme was taking off points because Kelsey said she believes in a god. Schools needs to facilitate more conversations like that. Hell, if there’s any truth to what she teaches her daughter, Griffiths should welcome the opportunity for Kelsey to explain her beliefs.

“The whole thing, start to finish, is just wrong on six or seven levels,” said Griffiths, who added that to her knowledge, her daughter has never received an assignment similar to this before.

Probably not. It takes a damn good teacher to be able to moderate that discussion. Most teachers would just shy away from it altogether.

To be clear, I’d be opposed to this if it was trying to preach atheism to kids. But just having that discussion? Asking children whether they agreed or disagreed with the lyrics, and having them back it up? That’s something kids need to learn how to do at a young age.

… if the teacher was only doing his job and asking tough questions, then this is just another example of religion’s inability to take criticism.

Why are some Christian parents so afraid of their children simply being exposed to different points of views or ways of life?

When I have kids, I hope I have more respect for my children than to think they’re going to change their beliefs/lifestyle in an instant just because they had a conversation about it. If I raise them properly, they’ll be able to explain why they believe what they do.

Meanwhile, Orme has been pulled from the classroom “until the board concludes its investigation into whether the religiously themed assignment was appropriate and consistent with curriculum.”

At least some parents know a good teacher when they see one:

“It has been blown out of proportion,” said Wendy Hine, whose 12-year-old daughter is in the class.

“You have an excellent teacher who really, really has a good connection with the kids,” she said. “This is now affecting their education.”

Hine was also perplexed as to how the concerns of a single parent could lead to a teacher’s removal.

“This one parent and one student spoke for all of us and I don’t think that’s very fair,” she said. “All of the other parents need to be heard.”

“I think it’s ridiculous,” she said. “That’s why these kids go to school, to learn how to think for themselves.”

Grant-Pride said her daughter Andrea, 12, was so upset over losing her teacher that she and her friends created a poster calling for Orme’s return.

May 16, 2011
Rapture Believers, What Are You Waiting For?
Next Post