Atheists in The Office May 14, 2011 Guest Contributor

Atheists in The Office

In case you missed The Office this week, Dwight is the interim regional manager. One of the things he does with his power trip is make all the employees say the Pledge of Allegiance.

The camera then pans in on Oscar keeping his mouth shut while everyone else says “Under God” (sorry, non-Hulu people!): 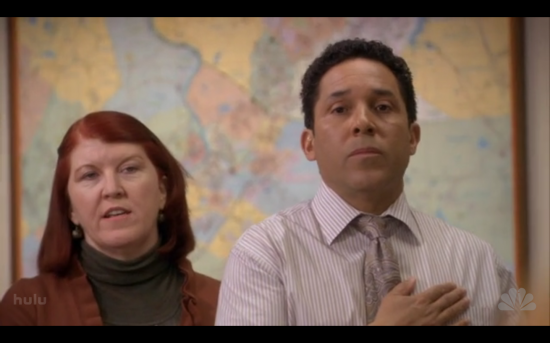 Later in the episode, as Gabe confesses his love for Erin, his lovely monologue includes a whole lot of backpedaling about God:

… or it could be. I mean, it’s possible that that is exactly what God is. But for all of the disbelief, I believe in us.

It’s nice to see atheists in a mainstream show. Gabe is pretty neurotic, but Oscar tends to be the rational, intelligent guy on the show. I don’t know if Ricky Gervais had anything to do with the atheism references, but I’d love to see more of them 🙂

(Thanks to Curt for the link!)