I love those stories where sports and religion collide. I’m not used to seeing it in hockey, though.

It’s a great message and it’s nice to hear it from an athlete, especially given the sense of homophobia in major league sports. (Quick! Name an openly gay professional athlete!)

Anyway, that led agent and vice president of Uptown Sports Todd Reynolds to tweet these thoughts (read from the bottom up): 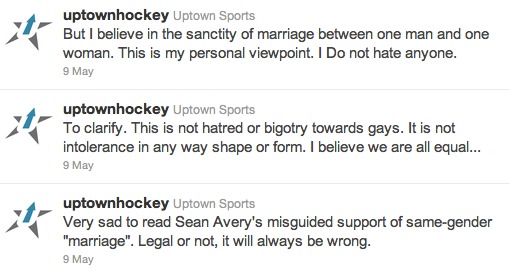 Very sad to read Sean Avery’s misguided support of same-gender ‘marriage’. Legal or not, it will always be wrong.”

To clarify. This is not hatred or bigotry towards gays. It is not intolerance in any way shape or form. I believe we are all equal…

But I believe in the sanctity of marriage between one man and one woman. This is my personal viewpoint. I Do not hate anyone.

Got that, everyone? We’re all equal, but some of you don’t deserve the same rights that Todd Reynolds has.

(In case you were curious, Reynolds is Christian. Surprise!)

In case his statement wasn’t despicable enough for you, his own father jumped into the fray and made it all worse:

His father and partner in Uptown Sports, Don Reynolds, said, “The majority, I think, of Canadians would say that they don’t agree with gay marriage — that man and woman were created to be married, not man and man or man and horse, you know?”

At least we now know where the younger Reynolds gets it from.

Reynolds is an agent. He’s not a politician. He’s not making laws. He’s just a bigot. Should we really care what he thinks? Maybe not.

But just think of the statement it would make if his current clients dropped him because of what he said. Joe Yerdon at ProHockeyTalk writes:

Uptown Hockey represents a handful of NHL players right now. Andrew Brunette, Carlo Colaiacovo, Jonathan Bernier, Kyle Clifford, and perhaps most notably right now Nashville’s Mike Fisher. A sports agent, or agents in this case, using the company name to flaunt their personal politics seems like the kind of thing that would rankle a player who may not agree with those personal politics. Bringing that sort of attention on a player seems like the sort of thing that would be a bad business decision, never mind in the view of public relations.

Even if the Reynolds and their ilk are against gay “marriage,” there’s no reason they should oppose equal rights for gay couples, right? Reader Nic writes:

Believing in the “sanctity of marriage” should never be an acceptable public excuse for standing against same-gender unions; in fact, I can’t believe he and others like him still get away with it.

They get away with it because not enough people speak out against it — especially moderate Christians who don’t want to “start trouble.” If they began making a bigger deal about this in their churches, you can bet things like this wouldn’t happen nearly as often as they do now.