Missouri Republican Sponsors Bill That Will Change Nothing May 13, 2011 Guest Contributor

Missouri Republican Sponsors Bill That Will Change Nothing

Things you can already do in the state of Missouri:

Things a newly proposed Constitutional Amendment (sponsored by Republican Rep. Mike McGhee of Odessa) would allow people in Missouri to do:

So why even bother with the legislation?

McGhee said he sponsored the legislation for five straight years because of a fear that government would use the separation of church and state as a reason to keep people from privately praying on public property.

“If voters approve this, it will send a message that the citizens of the state believe it’s OK to read a Bible in study hall,” McGhee said. “That it’s OK to pray briefly before a City Council meeting. That’s what we were trying to do by bringing this amendment forward.”

“This was such a meaningless amendment, we just didn’t feel like we needed to put forth the effort to stop it this year,” [Sen. Jolie Justus, D-Kansas City] said. “It doesn’t do anything at all, so I just decided to focus on trying to stop bills that actually do harm.”

I’ve never heard a church/state separation advocate or ACLU member try to shut down someone’s right to pray privately — in fact, that’d go against what they stand for. McGhee’s fear is unwarranted and this Amendment is a waste of time, whether the voters like it or not.

Even though it seems like a certain victory for McGhee, Chad Garrison doesn’t think he’s going to be thrilled with the results:

We’ll see if McGhee continues to whistle that tune when — following passage of the amendment — a practicing Muslim dares to get on his knees inside the state Capitol and pray in the direction of Mecca.

I sincerely hope that happens.

Better yet, get a group of Muslims in there. And have them fight to lead those City Council invocations, too.

(What’s wrong, McGhee…? Is that not what you meant?)

I love the picture and caption that accompanies Garrison’s blog post: 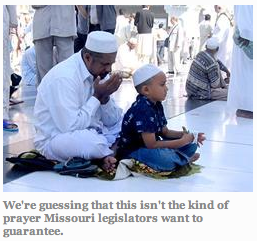 (Thanks to William for the link!)

May 13, 2011
The Treatment of a Gay Student at Messiah College
Next Post