David Barton, the Christian conman who’s revising history to have a far more Christian slant to it than it deserves — and influencing several state history curriculums in the process — was on The Daily Show last night. The extended interview is now on their website.

The whole thing is just infuriating. Barton goes on and on (and on), talking over Stewart, saying that Christianity is under attack. Stewart calls him out on it. Barton changes the subject, cherrypicks court cases to prove some obscure point, and acts like he’s victorious. (Both Barton and Stewart also misstate a lawsuit brought about by the Freedom From Religion Foundation — FFRF has no desire to force people to stop praying, but they don’t believe the government should be promoting a National Day of Prayer. And they’re right.) Stewart never really nails him, though, and I was unsatisfied after watching the entire interview.

Chris Rodda wasn’t happy, either. She had written a book debunking the lies of the Christian Right’s retelling of our nation’s founding called Liars For Jesus: The Religious Right’s Alternate Version of American History Vol. 1. 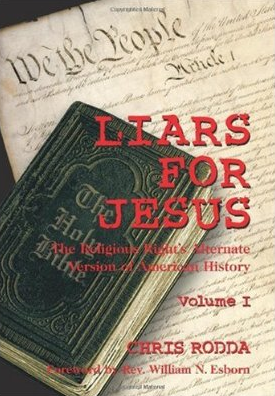 But after hearing the interview, she can’t take it anymore. She’s going to give away her book for free in the hope that the truth can spread:

Sure, I could write about the particular snippets of disinformation and dishonesty that spewed forth from Barton during this particular interview, but what good would that do? Been there; done that. Then, staring up at the face of Ben Franklin, it was his words, “Do well by doing good,” that suddenly popped into my head…

… [Those words] have now been stuck in my head for hours, and aren’t going to leave until I do what I’m about to do: give my book away for free.

So download it, read it, spread it, and help put a dent into Barton’s influence. Better yet, buy it if you can so future volumes can be published.