Is This Christian Author Really a Former Atheist? May 4, 2011 Guest Contributor

Is This Christian Author Really a Former Atheist?

If you’re trying to make a name for yourself in the Christian world, one way to gain instant credibility is to claim that you used to be an atheist. Lee Strobel and Kirk Cameron have both said as much — though you won’t find them making any public statements regarding their atheism before they began evangelizing.

I bring that up because Matthew Botsford and his wife Nancy have a new book out called A Day in Hell which I’m sure some bookstores have wrongly placed in their non-fiction section. According to the book’s description:

A Day in Hell is the riveting, true-life account of one man’s descent to the bowels of hell after dying from a gunshot wound to the head in March of 1992, and the true, wholehearted prayer of love by his newly wedded wife. Matthew survived, waking up twenty-seven days later. Unbeknownst to all those surrounding him, God had pulled him from his cell in hell and said, ‘It’s not your time.’ A Day in Hell is a story flooded with hope and inspiration as this young couple figures out how to plot their new life.

He didn’t go to hell. He clearly didn’t die. And it’s probably not a riveting story, either.

The obvious question here is: Why should anyone believe the story? Because Matthew says he used to be an atheist, of course! And he does it in the most confusing way you’ve ever heard…

Christian Post: Can you tell us about your life before the accident? Did you believe in God?

Botsford: No, I did not believe in God. I knew God existed but I didn’t have a relationship with His son. During college I turned my back; I was my own boss kind of thing.

If you’re trying to make sense of that remark, join the club.

I don’t want to commit the No True Scotsman fallacy here… but screw it: No true atheist “knows” god exists but chooses not to believe in him. Those two things are mutually exclusive. You either believe god exists, or you don’t. Atheists are in the latter category. Botsford is not.

It even threw off the reporter at the Christian Post. When the article first went up and appeared in my Google Reader, this was the headline I saw:

Atheists must have complained, because when I finally read the article, the headline had changed:

Doesn’t quite have that punch, does it?

Looks like no one told the picture-caption-writer to make the change: 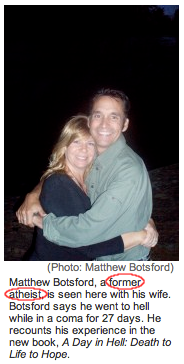 If anyone has to stomach to do a little research project, I would suggest reading this book along with Bill Wiese‘s 23 Minutes In Hell. Compare and contrast them. Let’s find out how different their versions of hell are 🙂 They’re both liars (either that, or they tricked themselves into believing their own imaginations), and maybe we can use one of them to discredit the other.