The Christianity Epidemic in the Van Buren School District May 3, 2011 Guest Contributor

The Christianity Epidemic in the Van Buren School District

If I were a parent in the Van Buren School District in Arkansas, I’d be worried about the education my kids were getting. Certain faculty members and administrators alike don’t know how to keep their religion to themselves when they’re on duty.

Check out what Van Buren High School Principal Becky Guthrie sent out to some of her staff members last month:

In a handwritten letter this month, Van Buren High School Principal Becky Guthrie asked 20 high school employees to become prayer warriors with her to resolve the crises at the school.

In the letter, Guthrie called the recipients her “brothers and sisters in Christ,” and noted that she’s never before written such a letter “and have certainly never sent one through school,” but felt a calling to do so at this time.

“We are under attack. God is moving in so many ways within our school. (A)nd Satan is angry,” Guthrie wrote.

She paraphrased a biblical passage in Philippians 4: “Let us stand firm in our God who will give us the peace that transcends all understanding and will guard our hearts and mind.”

She closed the letter by stating, “Our God is a strong and mighty God.”

What sort of awful leadership is that?! There are crises at the school and she thinks the best way to handle it is to give up all responsibility and action and throw it all in god’s hands?

She might as well go on the school’s intercom and say, “Students, you’re all fucked. We’ve given up on helping you.”

After the district’s superintendent, Merle Dickerson, heard about the incident, he downplayed it:

“It’s been handled as a personnel matter, and I don’t think it’ll happen again,” Dickerson said.

He said he made several phone calls and doesn’t think the principal’s disseminating such a letter to select staff at school was illegal although it may have been ill-advised. Dickerson said he did not consult the school district’s attorney.

Dickerson said he knows Guthrie didn’t intend to put her staff in an awkward position.

How is what she did not obviously illegal? It’s proselytization in the public schools. This is about as plain and simple as it gets.

You know he would’ve taken harsher action if the principal were a Muslim. A letter with the phrase “We are brothers and sisters in the eyes of Allah” would have been much more controversial, don’t you think?

It looks like all this Jesus-preaching is endemic in the district. And when a principal barely gets a slap on the wrist, it lets teachers know nothing will happen if they try it, too.

That must explain why a teacher in the same district, Central Middle School‘s Jan Redden, was caught doing something equally as illegal last week, when she sent home the following note with her students: 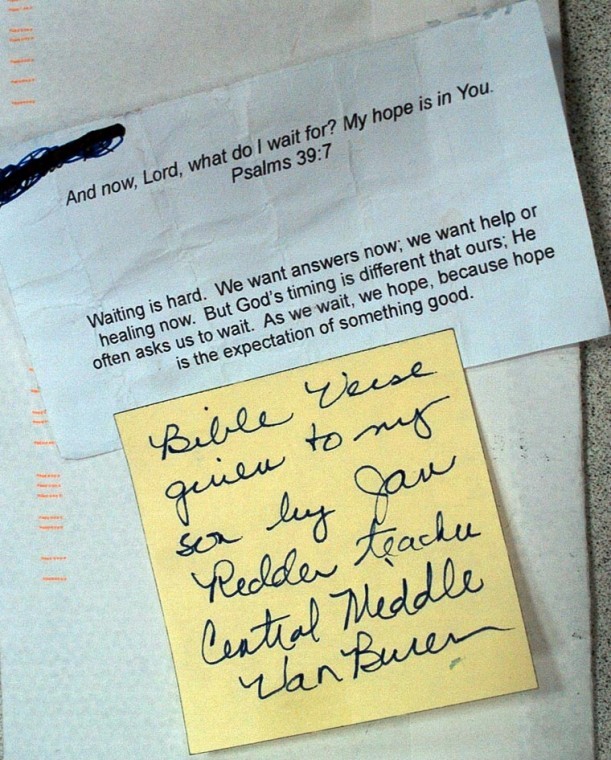 On April 21, a parent said, her son told her that before the students’ annual Benchmark exams the preceding week… Redden prayed “for the Devil to be bound up and not to enter their brains.”

“I no more want her leading my child in prayer than I would want someone from a different faith leading a meditation,” the parent said.

One other parent complained about it, too. The administration at the school took action, putting a stop to the “pretest prayer” and the personalized Christian Bible verses. Again, Superintendent Dickerson said “the matter was handled as a personnel issue.”

But, still, it looks like it was merely a slap on the wrist. It only gets worse when you hear what Dickerson said about it:

Dickerson said the district follows the U.S. Department of Education’s guidance regarding religious practices at public schools and will continue to do so. He said he is unaware of other such violations in the district.

“I think there are gray areas surrounding the idea of when a professional is acting in his official capacity and when he is not, and that’s crucial,” Dickerson said. “And in the (classroom case), this was with students, and guidance was much more clear.”

If the principal sent a Jesus-y handwritten letter to staff members while on duty — which she openly admits to doing — she was acting in an official capacity and that shouldn’t be condoned.

How much more blatant do these staff members have to be before it’s clear they care more about preaching than teaching?

I don’t know why parents haven’t filed a lawsuit against this district; it looks like it’d be an easy victory. The superintendent is sticking his fingers in his ears when the law is broken and he’s not taking any significant action to put a stop to it.

I suspect it won’t be long before we hear about another church/state violation in the same district.

(Thanks to Donald for the link)