Between 1884 and 1910, Charles Chilton Moore created a freethought newspaper called “The Blue-grass Blade.”

A mildly progressive paper in the beginning, the Blade quickly evolved into an outright freethinking pulpit with a strong emphasis on the separation of church and state. The Blade openly supported other controversial causes of the time as well, from women’s suffrage to free trade to “special National legislation to improve the condition, financial and educational, of Negroes and Indians,” while always remaining devoted to atheism, rationalism, temperance, vegetarianism, and any other issue that seemed to cause unrest among the paper’s antagonists.

Sounds like a lot of people we all know today.

Even thought there’s a long history of freethinkers in this country, it still amazes me someone could be that outspoken over a century ago.

Reader Tom was doing some research on the paper and came across the following cartoon from a 1903 issue. It looks like the New Atheists — with their weapons of “cold facts” and “ridicule,” battling against the “pulpit lies” — are nothing new at all. (Click image to enlarge): 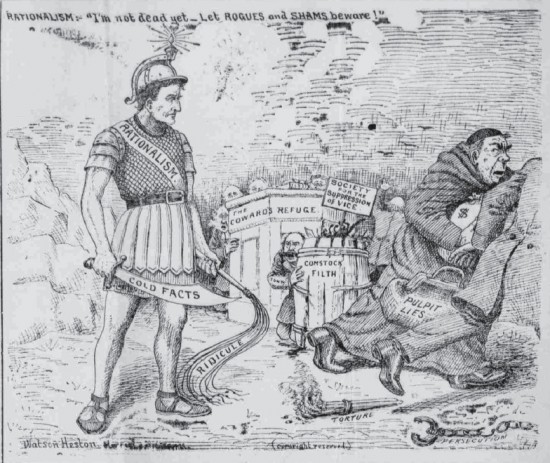 April 28, 2011 Ask Richard: My Friend’s Religiosity Is Becoming More Strange
Browse Our Archives
What Are Your Thoughts?leave a comment