The Secular Student Alliance affiliate at the University of Northern Iowa decided to do some volunteering early. In response to their campus’ “second annual 24/7 Prayer Week” (a Christian effort to encourage “seven days of continuous prayer”), the atheist group scheduled a variety of volunteering opportunities.

“If people want to pray, that’s their prerogative, but we wanted people to have an opportunity to give back to the community in a real way,” said [senior Cory] Derringer, a sociology major and president of UNI Freethinkers and Inquirers.

“It’s fun work and you can see the benefit as you do it,” Derringer said.

UNI Freethinkers and Inquirers invited both non-religious and religious students to take part in 24/7 Service Week. About 20 students showed up for service projects, Derringer said, and to his knowledge, maybe one or two openly identified themselves as religious.

What a fantastic project. This is the type of interfaith cooperation I can get behind 🙂 It’s not about promoting superstitious nonsense. It’s about getting work done, and I’m proud of the atheist group for taking a lead on this. 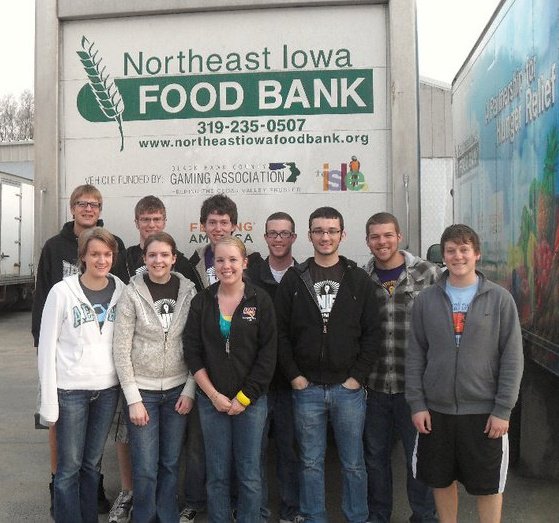 On their website, UNIFI member MIchael Dippold offered his thoughts on why Service Week was so important:

Organizers of Prayer Week have claimed that “God has done amazing things this week, as we humbly expected him to!” Unfortunately, I don’t see it. No mountains moved. No diseases magically disappeared. People are still ravaged by the plagues of war, famine, and poverty. This is why prayer is ridiculous, and why it’s so important to compare it to ways of helping the plight of the human race that actually do work. It has been said that two hands working can do more than a thousand clasped in prayer, I absolutely believe this to be true.

Over the next week or two, you’ll hear Christians talk about how prayer is important but they must go hand-in-hand with deeds.

Which makes no sense when you think about it. And churches do it all the time.

They want a new building, so they pray for it… but they also ask for donations.

They might pray to get better if they’re sick… but they’re also going to see the doctor.

If the latter works, you don’t need the former. There’s no redeeming quality to prayer. It accomplishes nothing except making the Christians feel better about themselves.

The atheists are just making that equation more efficient.

April 27, 2011
Why Does Clovis High School Want to Ban After School Clubs?
Next Post

April 27, 2011 Christian Beach Towel
Browse Our Archives
What Are Your Thoughts?leave a comment