Actress (and Christian) Kristin Chenoweth, in a response to Ricky Gervais‘s article on Easter, says she understands where atheists are coming from: 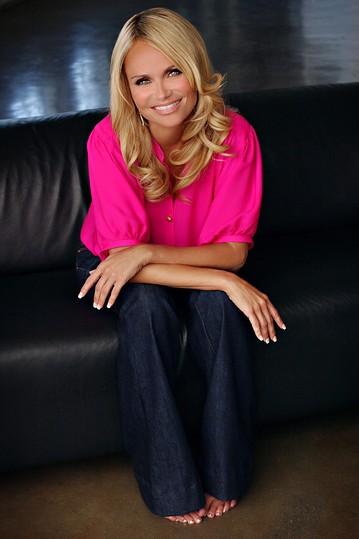 Believe me, when I hear myself talk about Jesus Christ being “risen from the dead,” I can almost hear myself laughing.

Another whackadoo notion is the idea of the second coming, or the Rapture, as many Christians call it.

I get it when atheists look at us like we have three heads when we describe what will happen: “Yes, we’ll just be sitting here and I will disappear….Yes, planes will fall from the sky, cars will crash, pets will disappear too….”

Kookoo!! Ridiculous!! Laughable!! And, yet…

“And, yet” nothing. She goes off on why she still believes all those “whackadoo” things. Because, somehow, her faith trumps any sense of logic and sanity.

I don’t judge those who don’t believe. After all, we’ve been told our whole lives… that scientists can now prove we come from apes…or fish…or a spark…all of that could be true. Maybe I didn’t come from Adam’s rib… but then who made the ape, the fish or the spark?

Again, it’s my choice to believe there is something way greater than me. That there is a Lord above who loves us all, even if we choose not to believe in Him.

When I die, I will be in heaven celebrating with my loved ones, in a place so wonderful I can’t fathom it now. Is it wrong that I can’t wait? Is it bad that I want to walk on streets of gold and sing with my grandma again?

Here’s the problem with what the Wall Street Journal is doing.

They ask Gervais to write an article and they get something funny and intelligent.

They ask Chenoweth to write a response — She’s another celebrity! She’s Christian! She’ll bring hits to our site! — and they get something nonsensical and full of platitudes.

This is why you shouldn’t ask people to write articles on subjects they know little about.

At one point, Chenoweth quotes a line from a movie to stick it to atheists:

“Just because you don’t believe in something, doesn’t mean it’s not true.”

She ought to take her own advice when it comes to reason.

April 22, 2011 The Reason Rally is a Year Away...
Browse Our Archives
What Are Your Thoughts?leave a comment