You knew it was too good to last.

Last year, the Freedom From Religion Foundation won a lawsuit which declared the National Day of Prayer unconstitutional. It was the correct decision, but a surprising one, nonetheless. U.S. District Judge Barbara Crabb wrote in her decision:

… the government has taken sides on a matter that must be left to individual conscience. When the government associates one set of religious beliefs with the state and identifies nonadherents as outsiders, it encroaches upon the individual’s decision about whether and how to worship.

FFRF even paid for a full-page ad in the New York Times to highlight their reasons to declare the NDOP unconstitutional.

You knew the decision would be appealed. And yesterday, the U.S. 7th Circuit Court of Appeals said that FFRF lacked “standing to challenge either the constitutionality of the federal statute that creates a National Day of Prayer or the Presidential proclamations issued under that statute.”

In other words, FFRF and its members aren’t really “injured” by the president issuing a proclamation about the NDOP. The ruling by Judge Frank Easterbrook says (PDF):

The President’s 2010 proclamation includes this sentence: “I call upon the citizens of our Nation to pray, or otherwise give thanks, in accordance with their own faiths and consciences, for our many freedoms and blessings, and I invite all people of faith to join me in asking for God’s continued guidance, grace, and protection as we met the challenges before us.” But although this proclamation speaks to all citizens, no one is obliged to pray, any more than a person would be obliged to hand over his money if the President asked all citizens to support the Red Cross and other charities. It is not just that there are no penalties for noncompliance; it is that disdaining the President’s proclamation is not a “wrong.” The President has made a request; he has not issued a command…

For those keeping track, Michael Newdow lost his case to remove “Under God” from the Pledge of Allegiance because the Supreme Court said he also “lacked standing.” And the Appeals Court didn’t hesitate to point that out (emphasis theirs):

Plaintiffs contend that they are injured because they feel excluded, or made unwelcome, when the President asks them to engage in a religious observance that is contrary to their own principles. It is difficult to see how any reader of the 2010 proclamation would feel excluded or unwelcome. Here again is the proclamation’s only sentence that explicitly requests citizens to pray: “I call upon the citizens of our Nation to pray, or otherwise give thanks, in accordance with their own faiths and consciences, for our many freedoms and blessings, and I invite all people of faith to join me in asking for God’s continued guidance, grace, and protection as we meet the challenges before us.” But let us suppose that plaintiffs nonetheless feel slighted. Still, hurt feelings differ from legal injury. The “value interests of concerned bystanders”… do not support standing to sue.

If a perceived slight, or a feeling of exclusion, were enough, then Michael Newdow would have had standing to challenge the words “under God” in the Pledge of Allegiance, yet the Supreme Court held that he lacks standing.

Truth be told, the judges have a point — FFRF wasn’t injured directly. They were only suing on behalf of all of us who see the NDOP as as endorsement of religion… and the ruling had nothing to do with the merits of their arguments.

You have to wonder how the court would have ruled if “standing” wasn’t the issue.

FFRF plans to fight back, but it’s hard to see this ending in its favor. The decision against FFRF was made by a panel of three judges. FFRF now wants the entire Seventh Circuit to rehear the case (“en banc“) but the court can deny them that opportunity.

Foundation Co-President Annie Laurie Gaylor condemned the appeals court decision as cowardly. She said it is clear that had the appeals court panel ruled on the merits instead of throwing the case out on standing, FFRF would have won, as it did in federal district court.

“Our challenge is so strong, our claim is so correct. The First Amendment says, ‘Congress shall make no law respecting an establishment of religion.’ ‘No law’ should mean no law!” Gaylor said.

“This ruling threatens the foundation of church and state separation which this country thrives on,” said Roy Speckhardt, executive director of the American Humanist Association. “A government institution, let alone the President of the United States, has no business endorsing any form of prayer. To dismiss this challenge is to move the country a step further from the religious freedoms its citizens value.”

Americans United for Separation of Church and State agreed:

“This decision is part of an ominous trend in the federal courts to deny Americans the right to challenge church-state violations,” the Rev. Barry W. Lynn, executive director of [AU] said in a prepared statement. That group filed a brief in support of the case.

So the NDOP will go on as scheduled, the evangelicals will pretend like the NDOP is inclusive of all religions when they know it’s really only about Jesus, Obama will endorse it as all presidents do, and atheists will be excluded. 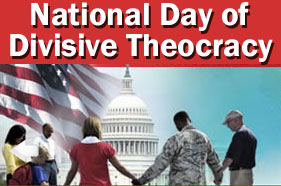 We always have the National Day of Reason, but the attention given to it pales in comparison to the NDOP.

April 16, 2011
I’m On Freethought Radio This Weekend
Next Post