An Excerpt from Open All the Way: Confessions From My Open Marriage April 14, 2011 Guest Contributor

An Excerpt from Open All the Way: Confessions From My Open Marriage

“Sexie” Sadie Smythe has been writing stories about her open marriage for a couple years now on her website (NSFW). She’s also been telling them at BedPost Confessions, an event she hosts and organizes in Austin, TX. She’s honest, reflective, and a direct threat to anyone who thinks marriage must be a one-size-fits-all proposition.

Her new book is called Open All the Way: Confessions From My Open Marriage and an excerpt is below. It features swinging Unitarian Universalists — How can you resist reading it?! 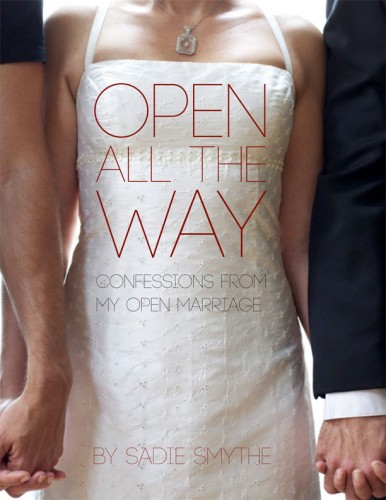 Back then we didn’t know much at all about what an open marriage even looked like. It was 1995 and while one of the handfuls of clunky search engine robots might have unearthed a small smattering of information on the subject of open relationships, fact gathering in such a way wasn’t yet a part of the cultural wheelhouse. We didn’t know anyone that was in an open marriage, and if we did, we were never made aware of it. Non-traditional relationship arrangements weren’t broadcast at dinner parties, or discussed on daytime talk shows, or in any other place where hetero-normative attitudes prevailed. And hetero-normative attitudes were status-fucking-quo. We only knew the general concept of open relationships based on stories we’d heard about the sixties’ free-love movement, diluted accounts that had been highlighted in documentaries and featured in liner notes of select record albums. Or from tales of swinging key parties circa late seventies and early eighties; tales handed down by parents and other sources whose biases were questionable.

For instance, during my early childhood in North Carolina, where we lived for a few years, my father had unwittingly placed our family amid a blissful congregation of spirited swingers in the Unitarian Universalist Church. He loved the church and its members for their open door policy and free-spirited attitudes, so much so that he and my mother decided to enroll me in kindergarten class on weekday mornings. But little did he know just exactly how free-spirited these Universalists actually were. Nor was he aware that accidentally uncovering their radical non-conformity would challenge his own interpretation of what being open-minded actually was. Because while my mother knew at the outset (and how she knew is something she claims not to remember,) my father did not know that the people they worshiped with on Sunday mornings, the beatific new-age folks who taught my sisters and me in our Spiritual School classes, and perhaps even my kindergarten teacher, were all fucking each other. And upon his discovery of this, that the people he had come to know and respect had an entirely different definition of Unity, he pulled us out of the Church about as fast as he could say,

Peace, liberty and sex for all!

And my family never went to church again.

It makes you wonder how many non-traditional couples go to church at all… surely, there’s even an Evangelical megachurch somewhere attended by a couple (wrong word choice?) that’s polyamorous or also open with their marriage. We already know the stories of some pastors who have gay lovers on the side…

Let’s do one more excerpt…

I grew up not nurturing fantasies of a white wedding, a picket fence, and happily ever after, but instead with an established presumption that I would never get married. Or have kids. I was, quite obviously, wrong on both counts.

I’ve always maintained, even before I was able to rationalize my attitude about it, that it’s kind of odd the way our culture sets us up for marriage: two people, often still essentially in the toddlerhood of their lives (in their twenties) decide to partner forever with a person they truly believe they will always love or at least will always remain committed to. Always. And for most people, this Always time-frame translates into fifty, sixty, sometimes even seventy years. Only 100 years ago, the lifespan of a human being was around fifty years, so getting married young didn’t constitute such a long-term commitment. In fact, people got married in their teens back then, but even still, they were only looking at thirty-odd years together.

But even thirty years is a long-fucking-time!

The church claims to hold ownership over the construct of marriage. Which is why marriage in its current state excludes a sizable segment of the population. The discriminating purveyors of the current marriage decree have marginalized an important set of people — gays and lesbians — who are not only deserved of the right to pledge their love but should also be entitled to the exact same benefits that taking that pledge garners their heterosexual counterparts. The fact that our culture continues to proclaim marriage’s powerful credibility to the degree that we limit access to its advantages is downright laughable. Or at least it would be if it weren’t so fucked up.

The fact is that everyone, everyone, should be given the opportunity to design their relationships according to the specifications of those involved. All should be authorized to draw up their very own relationship plans and put them into action.

And so that’s what we did.

Sadie’s been happily married to her husband Scott for 14 years now and they have a daughter who’s 11. Sounds like they’re doing something right 🙂

If you’d like to win a copy of Sadie’s new book, just leave your thoughts about marriage in the comments! Please include the word “Sexie” at the end of your comment to be in the running — You don’t have to live in America to win this one. I’ll contact the winner via email next week.

Do relationships have to be monogamous in order to work?

For those of you who attended church at some point, did you ever know couples who were in a non-traditional relationship? How did they reconcile their faith with their “unbiblical” marriage?

For anyone in a non-traditional relationship, are you open about it? To whom?

April 14, 2011 Atheists Billboards Go Up in Orlando!
Browse Our Archives
What Are Your Thoughts?leave a comment