Atlanta Atheists Are Now Meeting in a Former Church

I don’t know how many places the Atlanta Freethought Society considered when they were looking for their new headquarters, but they eventually settled on the former Collins Springs Primitive Baptist Church (That’s really its name. The jokes just write themselves…) 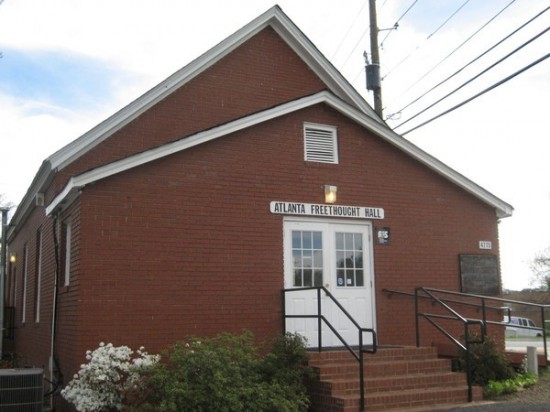 After 140 years, the building had been sold to developers, fallen into disrepair and was in danger of being destroyed by vandals. But [Lew] Southern and his friends were determined to bring the church back to life.

AFS bought Collins Springs with the intention of converting it into their headquarters and meeting hall. Cosmetically, there wasn’t much the group needed to do to convert the church into their hall. Primitive Baptists don’t adorn their churches with steeples and stained glass.

“When we took over the building all we had to do was refurbish it back to condition, which was a huge task, but at least we didn’t have to worry, ‘Oh are we going to take down all the old icons and throw them away?’” [chair of the AFS activism task force Ed] Buckner said.

The all-volunteer force renovated the building so it’s now suitable for use. They even kept some of the furniture:

Nice touch. The only other major artifact from the old church still there is the sign on the door: 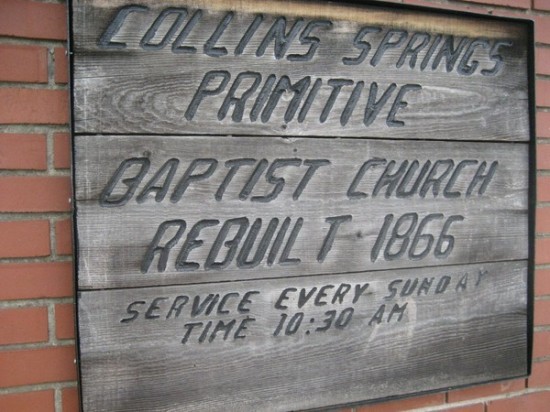 Lots of changes were made to the building, but the one that’s not going to be written about is how now, finally, the building will be dedicated to telling the truth about the way the world operates.

I suppose it could also serve as a larger metaphor, too: If a church can become a hub for atheism, then what’s stopping religious people from becoming atheists? 🙂

April 10, 2011
The Animated Version of Tim Minchin’s ‘Storm’
Next Post

April 11, 2011 Ask Richard: Mom Believes She Communes with Ghosts
Browse Our Archives
What Are Your Thoughts?leave a comment