The Pizza Dough Will Rise Again

The last time I heard about New Zealand’s Hell Pizza, they were buying a guy’s soul to get publicity.

And now they’re back with something a little more blasphemous. Their new billboards feature hot cross buns… and a reference to Jesus: 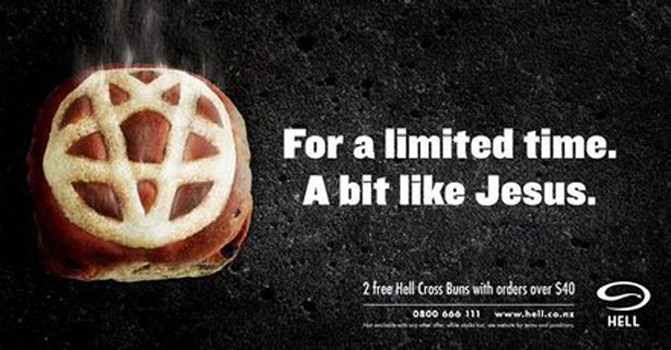 I don’t see what’s so bad about that… they’re acknowledging Jesus’ existence. You’d think Christians would appreciate that! But they don’t:

Anglican Church media officer Lloyd Ashton said the campaign was disrespectful to many religions and the people who followed them.

“They [the billboards] join a long line of advertising that’s in questionable taste that slings off [at] things that lots of people hold precious.

“It’s disrespectful to what a lot of people hold very dear.”

“Their buns are stale…”

Hell Pizza is used to anger from the Christian crowd, though. They once advertised their “Lust” pizza with a mailing that contained a condom. (Feel free to insert your own “meat-lovers” joke here.)

It’s really not a big deal. This is just a company having some fun with its ads, playing off its devilish image. It’s not like Christians would embrace such a pizza place even without the ads; the fuss over the latest billboard only increases publicity for the company. More power to them.

(Thanks to Charlotte for the link!)