There is a wonderful article in Monday’s New York Times by Michael Winerip in which he profiles a high school atheist group. 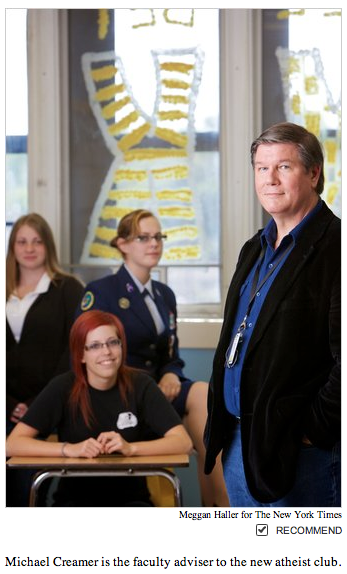 It’s rare to see a group like that discussed in print, and probably rarer to see it in a positive light, but that’s what you have here:

Club members discussed what to do about Faith Week. Rutherford High’s two Christian clubs will be sponsoring a series of before-school prayer circles around the flagpole this week, and several of the atheists felt a need to respond in some way. “We can set up informational tables near the flagpole and do our own speeches,” said Mr. [Michael] Creamer, who suggested waiting a few weeks. “Remember, we’re not trying to be confrontational; this will be a counterpoint.”

Mr. Creamer, 47, an English teacher and longtime atheist who grew up in a family of Free Will Baptists, is constantly urging club members to “be friendly, put on those smiles — people don’t expect that from atheists.”

A lot of the story focuses on the faculty members who sponsor the atheist and Christian groups — it shows the importance of having interested, active faculty sponsors at that level. (I only wish there was more information about the students joining the atheist group.) Still, Creamer seems like a good guy to lead a group like this.

Long before there was an atheist club, Mr. Creamer was open about his atheism. And yet as Joshua, the Christian club president, says, “He lets you know what he believes, but I’ve never seen him try to convert anyone.”

Mr. Creamer teaches his students that if they are going to stick out their necks for unconventional ideas, they better not stick out for any of the wrong reasons. “Mr. Creamer told us, as an atheist, you have to be on your best behavior,” said Nick Machuca, a junior.

The interaction between the heads of the atheist group and one of the Christian groups is probably my favorite part of the article:

Joshua Mercer, a senior, who is president of Ignite, a Christian club, and Jim [Dickey], the atheist president, are close friends. They love comparing philosophies, and giving each other a hard time. “We like to go to Taco Bell together,” Joshua said.

Still, he worries about Jim and the other atheists. “If they don’t accept Jesus Christ as a savior, they will definitely go to hell,” said Joshua, who rises at 4:30 each morning to read the Bible with his grandmother.

Makes for great conversation, I’m sure. But that’s really what you want to stress in high school. The students are finally at an age where they can “find” themselves, discover who they are, and decide what they really think about some of the beliefs they grew up with. You want them interacting with people who have different points of view. It won’t be long before inflexibility sets in for many of them…

The article mentions how the Christian group’s faculty sponsor opposed a dialogue between the two groups because it might “turn into a debate.” That’s unfortunate. You can have a respectful debate. Those are the dialogues faculty sponsors should be advocating, not opposing. Go have them. Moderate them. If students get uncomfortable because their religious (or non-religious) views are challenged, that’s a good thing.

Of course, I’m thrilled that the Secular Student Alliance is mentioned in the piece:

There have long been college atheist clubs, and at present there are an estimated 240 nationwide, said J. T. Eberhard, 29, of the national Secular Student Alliance. But recently they have been springing up at high schools. In the last three months, the number has risen to 21 from 12, Mr. Eberhard said.

The alliance, which is based in Columbus, Ohio, provides support services to atheist organizations. Several months ago, the Stiefel Freethought Foundation donated $50,000, enabling Mr. Eberhard to organize full time at high schools. His target is 50 clubs by year’s end.

Go, JT! Since he was hired only a couple months ago, its very impressive the number has almost doubled. Just wait till the fall arrives, when he can make a push for groups to form at the beginning of the school year.

There’s also a nice quick explanation in the article about why these groups are even allowed to exist in the first place. (Thanks, Christian Right!)

The federal law permitting extracurricular clubs to use public schools before and after hours was passed in 1984 after lobbying by conservative church groups. Bible study clubs grew fruitful and multiplied, replenishing the Christian faith throughout the land. Then things took a turn to the left. The law required equal access, and gay-straight clubs started popping up.

So, to all the high-school students at public schools nationwide, there’s nothing stopping you from starting an atheist group of your own. If you want to start a group, you can. If the administration stands in your way, the SSA will help you deal with that.

Side note: It’s nice to see some of the female atheist group members in the picture accompanying the article (and chromosome images on the wall)! But, again, I wish the students were in the foreground and not the background.

***Update***: There’s a better picture in this version of the article: 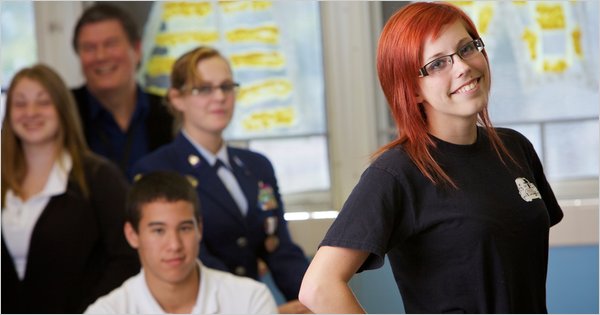